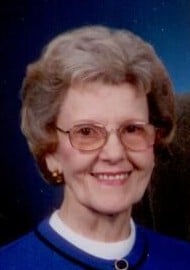 Shirley Lee Turner, 81, formerly of Kansas City, passed away April 20, 2012 at Lenoir Healthcare Center in Columbia, MO.  A memorial service will be held at 4:00 Wednesday, April 25 at The Groves, 1500 White Oak, Independence, MO.

Shirley was born on July 6, 1930 in Morganville, KS, the youngest child of Leah Helen (Seitz) and Joseph Dennis Taylor.  Following graduation from Morganville High School she lived a short time in Hawthorne, CA and then moved to Kansas City where she worked for TWA.  On April 25, 1952 she married Robert Holt Turner.  Their only child, Donald Francis was born in 1956.

In 1957 she went to work for Strike ‘n Spare Bowling Alley in Independence and ran the nursery for many years.  She worked her way up the ranks and retired as general manager in 1995.  In retirement she worked several years as a teller for Bank of America on Noland Road in Independence.

Shirley was a former member of the Kansas City and JaCoMo Chapters of Sweet Adelines.  She and her husband were long time members of First Baptist Church in Raytown and after moving to The Groves, Shirley became a member of Community of Christ and sang in the choir.

She was preceded in death by her son in 1978, her husband in 2007, five sisters: Pearl Lamar, Alice Irene Lamb, Nellie Taylor, Sadie Catherine Underwood, and Frances Michel, and three brothers: J. Herman, Charles, and Dennis Taylor.  She is survived by 12 nieces and nephews, daughter-in-law, June Helling, of New York, and sister-in-law Jane Taylor, of Independence.

Internment will be at Memorial Park Cemetery, Kansas City, MO.