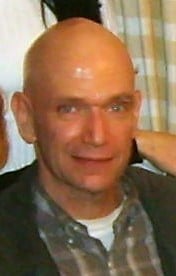 Stacy Allen Blatt of Kansas City Missouri died February 25, 2021 at Kansas City Hospice House. He had recently turned 64. He was a “miracle baby”, born February 8, 1957 in Independence MO to Roger and Elizabeth Blatt, after doctors had told them that Betty would never be able to conceive.

Stacy and his little brother Russell grew up in Independence in a house on Lyn-Del Circle, just off Shady Bend Drive, in a neighborhood jam-packed with other kids. He had many friends there and fun times.

Stacy was super-intelligent, but this intelligence sometimes proved to be a curse. He was bored with school but managed to finish high school, with his share of troubles along the way. After high school, he went to work as a tool and die maker at his father’s company Rabco. He was very good at his job but being the boss’s son came with its own set of issues.

Stacy had many interests. As a teen he got involved with judo, staying with it until he received a brown belt. During his Rabco days, he helped his best friend Robert start Van Kueren Games, a company that made miniature games. He also was a lifelong fan of punk rock, Rush Limbaugh, MST3K, Weird Al and The Rocky Horror Picture Show. He became an “expert” in all of these. Stacy dealt with anxiety his whole life, and often self-medicated with alcohol and drugs.

Stacy never married nor had children but did have several longtime girlfriends.

Stacy lived at home in his parents’ house until his father’s sudden death in 1990. He was unprepared to live on his own and the drug and alcohol use worsened. He was arrested in 2000 on a charge of manufacturing methamphetamine. Even though it was his first arrest, mandatory minimum sentencing laws in place at the time put him in prison for 10 years.

While the minimum-security prison was for the most part terrible for him, he did do something there that became one of his happiest memories. He formed a punk rock band called The Criminals with several other inmates. Even talking about the shows and practices with his band brought a sparkle to his eye. It was one of the few times he was able to beat anxiety without substances.

After prison, the anxiety got the best of him again and once again alcohol use became an issue. He really tried but it was difficult to hold a job. He was homeless for a period and was hospitalized after a brutal assault and robbery. It was then he found the Restart program, thru which he received housing and opportunities for job training. He got a job he really liked at Sprint Center on the night shift cleaning up after events. During the day, he went to training to get his CDL to drive big trucks, something he had always wanted to do. He developed relationships within Restart, including special friend Brandy Redell. Life was on the right track for him until 2016 when the esophageal cancer diagnosis first hit.

While he had his struggles, you couldn’t ask for a more loyal friend or brother. Once you were loved by Stacy, you were always loved by him. He loved discussing God with his caregivers during his final months.

Stacy was preceded in death by his father Roger Blatt and mother Elizabeth “Betty” Blatt (Lewis). Survivors include brother Russ Blatt, sister-in-law Carmen Blatt of Kansas City, nephews Gabriel Blatt of Kansas City, and Chris Arredondo of Olathe, plus his two cats Sid and Rosebud, both of whom have been adopted into great forever homes. Stacy will be cremated and his ashes buried with his mom and dad at Woodlawn Cemetery in Independence. No services are planned at this time due to covid, but we may have a graveside ceremony later in the spring when his ashes are interred. The family requests donations in Stacy’s memory to Restart Inc. at https://www.restartinc.org, or 918 East 9th Street, Kansas City MO 64106.