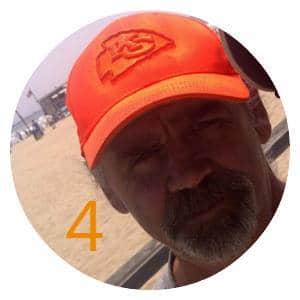 Rug Yewell, 52, of Kansas City, Mo passed away October 3rd, 2014. A memorial service will be held November 1, 2014 from 2-3 PM at Noland Road Baptist Church, 4505 S. Noland Road, Independence, Mo. Immediately following the service friends and family will gather at Johnnies/ Country’s/ Romie’s Bar, 5304 E. 24th Street, Kansas City, Mo to celebrate his life. Rug was born in Kansas City, Mo on May 27, 1962 to Ed and Ruth Yewell. He enjoyed his work as a demolition man and bartender. He never met a stranger. Rug was truly unique and one of a kind. Once you met him you never forgot him. He never told a friend “No” if they needed his help. He always had stories to tell and told them to anyone that listened. Survivors include his wife Susan Shortino and family, Dog Lady, Mother Ruth Yewell, Sisters; Carla, Denise, Lisa, brother Mike, and many nieces, nephews, aunts uncles and cousins. Rug was preceded in death by his father Ed Yewell, grandma and grandpa Swope, grandma Yewell, sister Lori Yewell and Cousin Randy Rue. There will be a private burial at Wayside at a later date.