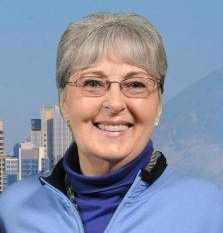 Sue Collier Horne, age 73, died December 16, 2014 at her home in Blue Springs, Missouri.  She was born near DeWitt, Missouri, February 14, 1941, the daughter of Marvin Junior Collier and Naomi Tietjens Collier.  She attended school at Bosworth, Missouri and graduated from Carrollton High School in 1959, then attended Central Missouri State University at Warrensburg, Missouri.  She lived in Dallas, Texas from 1962-66 where she was a hostess for Braniff Airlines.  She then moved to Palo Alto, California living there for 22 years, receiving a BA in Speech Pathology & Audiology.  She worked for the Fremont USD as a speech therapist and later was an administrative secretary for Varian Medical Systems.

In 1988 she returned to Missouri and lived in Blue Springs for 26 years. She was a hospice volunteer for Independence Regional Health Center in Independence for 8 years and active at the Remnant Church of Jesus Christ, Blue Springs Branch where she was a member since 1992.  Sue was devoted Christian woman who loved the Lord Jesus Christ and her church very much.  She was a very caring person always putting the needs of others before her own.  She helped several people by taking them into her home and caring for them in their time of need.  She even helped others after her death by being a donor.

She was united in marriage to Donald R. Horne in Blue Springs August 1989 and he preceded her in death on October 1998.  She married Sherman A. Morris, Jr. in April 2008.  She is survived by her husband of the home, her sister Sharon Miller and her husband Wayne of Carrollton, Missouri; her brother Dr. Dale Collier, DVM of Independence, Missouri; her step-sons: Mark, Matt, and Mickey Morris; her nieces Kristina Richardson, Tracy White, and Kimberly Yeager; and her nephews Jeffrey Miller, Gregory Miller and Mark Collier.

Cremation memorial services will be at her church in Blue Springs, the Remnant Church of Jesus Christ, 11 a.m. with visitation 10 a.m. on Friday, December 19, 2014.

In lieu of flowers, contributions can be made to the Remnant Church of Jesus Christ, Blue Springs Branch or the Carrollton United Methodist Church.