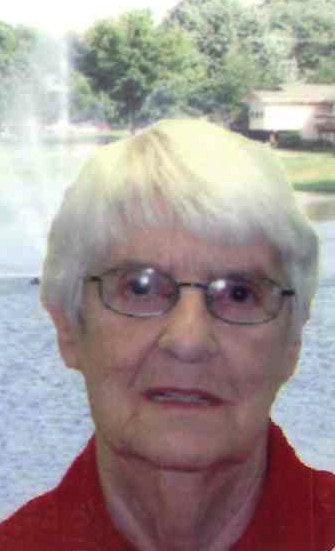 Teresa Ann (Dunser) Bice went to heaven on Friday, March 13th 2015. She died quietly at the John Knox Village Care Center. Her family was able to spend a great deal of time with her before she passed. Teresa was born on April 21st 1928 in Chillicothe, Missouri, the fifth daughter, and fifth of sixth children, to Joseph and Helen (Murphy) Dunser.

Teresa enjoyed her childhood growing up in Chillicothe. She spoke fondly of experiences with her parents and her siblings, her first job at a drug store soda fountain, and many stories of Christmas memories. As with many people of her generation, her experiences during the years of World War II shaped her view on life. She kept close ties to her siblings throughout their lives. She was especially close with Josephine Elmer, her older sister, who preceded Teresa in death in November of 2012. She also maintained a closeness with her children and their families. Teresa treasured the time she could spend with her grandchildren and great grandchildren.

Teresa married Clarence Raymond Bice on February 1st 1947 in Chillicothe, Missouri. They moved to Leavenworth Kansas, and started a family. Their six children were born and raised in Leavenworth. After Ray’s retirement, they moved to Tucson, Arizona, raising the last two children there. They enjoyed their lives in Arizona for 26 years before moving back to the Midwest, settling in Lees Summit, Missouri. Teresa was preceded in death by her son Joseph Michael Bice, who died in Arizona on July 21st, 1990. She was also preceded in death by her husband of sixty years, Clarence Raymond Bice, who died on November 14th, 2007. She is survived by her children, Charles Robert Bice (Pam), Mary Teresa Shults (Richard), Martha Ann Tranchilla (Albert), Lawrence Raymond Bice (Vici) and Elizabeth Helen Powers (Brian). She leaves twelve grandchildren and eleven great grandchildren.

The Mass of Christian Burial will be held on Tuesday, March 17th, 2015 at 10:30 AM at Our Lady of the Presentation Catholic Church, 130 NW Murray Road in Lees Summit, Missouri. There will be a visitation in the church at 9:30 AM.

Blessed be the memory of Teresa A. Bice