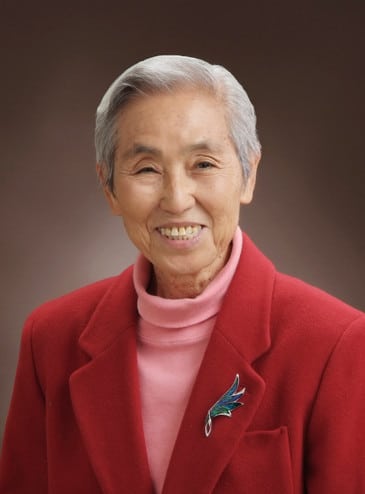 Teruko Kobayashi, 91, of Lee’s Summit, Missouri passed away on January 3, 2019 at John Knox Village. A memorial service will be held at 1:00pm on Friday, January 25, 2019 at Heartland Cremation & Burial Society, Raytown, Missouri. A visitation will begin at 12:00pm also at Heartland.

Teruko was born and reared in the heart of Tokyo, the fourth child in a large family. She trained as a nurse at the Japanese Red Cross Nursing School, specialized in surgical nursing, and became head nurse of a surgical ward. She also earned certifications in ikebana (the Japanese art of flower arranging) and kimono dressing. She and her future husband, Dr. Genichi Kobayashi, met shortly before he left for the United States to study hospital administration and continued their courtship long distance. Nine years later, she joined him after he had completed his studies. After marrying, they made their home in Elgin, Illinois and she worked briefly at Sherman Hospital before giving birth to their son, Ken. She devoted her life to the care of her family, but also maintained an active social life in the local community supporting her husband and son. She was heavily involved in the Sherman Hospital Women’s Auxiliary and supported her husband’s interests by hosting and entertaining numerous delegations from Japan as Elgin and Sherman Hospital became an important focus of teaching modern American hospital administration to Japanese physicians, nurses, and hospital administrators. At home, she created an environment that fused elements of Japanese and American culture into a unique blend of artistry and elegance as she made a life for herself and her family away from the land of her and her husband’s births. Raised as an urban child and young professional, she began life as a homemaker anew after immigrating to the United States and, as she learned homemaking skills, her integration of cultural influences spanned activities such as cooking, camping, tennis, sewing, and child rearing. Later in life, she studied and became an accomplished painter, working in both oil and watercolor, and sold a number of paintings in support of the Sherman Hospital Auxiliary. She also compiled, edited, and published a collection of her husband’s poems in Japanese and was working on an English language translation at the time of her death. Following her husband’s death, she relocated to Maryland to join her son’s family and, when they transferred to Japan on work assignment, she relocated to Lees Summit, MO to be closer to her daughter-in-law’s family, where she spent the remainder of her life. Throughout her life, she maintained a vigorous, joyful outlook and maintained close relations with her families both in Japan and in the United States. She will be missed.

She was preceded in death by her husband Genichi Kobayashi.