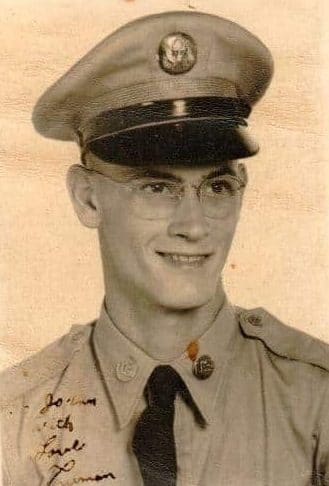 Truman Marvin Strasser, 82, of Warrensburg, Missouri passed away June 8, 2017 at the Veterans Administration Hospital in Kansas City, Missouri from cancer. A graveside service will be held in his honor at the Missouri Veterans Cemetery in Higginsville, Missouri on June 16, 2017 at 3:00PM. Mr. Strasser was born January 18, 1935 in Emporia, Kansas to Cleo Carl Strasser and his wife Martha Strasser.

Truman was a graduate of Emporia Kansas and later went into the Army during the Korean War. He was a sharp shooter (carbine) and left the service as a SP4 E-4 PVT. Truman married his childhood sweetheart, Jo Ann White, on October 23, 1954 in Bel-Air Maryland. They had four children; Truman Mark Strasser, Cynthia Jo Ann Woodward, Linda Kay Roth, and Martha Evelyn Jones. He had 8 grandchildren and numerous great grandchildren.

He was preceded in death by his father, mother, brother, wife, son, grandson, and granddaughter. Truman loved the Lord and his family. We were his hobby and his life.