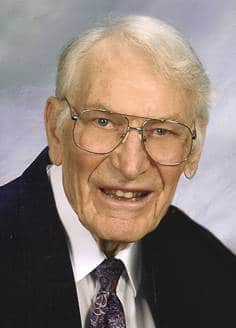 “You can have a song in your heart in the night,

Anyone can sing when the sun is shining bright,

But you need a song in your heart at night.”

Vernon E Rhoads, 82, died Nov 21, 2014, at home in Olathe, KS. He was raised with his three brothers on their grandfather’s farmstead northwest of Mitchell, Sanborn County, South Dakota. He was born at home to Ralph M and Pearl S Rhoads on April 28, 1932. He graduated from Forestburg High School and attended Wessington Springs Jr. College.

In August of 1953, he married Rhoda, daughter of Rev John P and Sarah M Tschetter. They first met at a mid-week prayer service at a rural neighbor’s home. Following Army training at Ft Riley, KS and Ft Lee, VA, he shipped out to Korea, serving an additional 18 months. During this time, he met with missionaries there, including Bob Pierce of World Vision who worked with orphans in Korea, impacting his gentle heart.

Following military service, Vernon returned to South Dakota to farm and raise livestock with his wife 14 miles south of Cavour where they raised their three daughters.

In 1975, Vernon, Rhoda and girls moved to Olathe, Kansas, where he worked in the physical plant at MANC (MNU) until disability retirement in 1996 due to Parkinson’s Disease. The students on campus kept him young at heart, and he was heard singing and whistling up & down the halls while he worked.

Farming was in his blood and he continued to mow the lawn on his “tractor” as long as he was able. He spent hours tinkering on that mower as well as in the garage, sorting through tools and a collection of items to “repair.”  He was also thrilled to have his photo taken by a large hay bale near brother Vince’s home in South Dakota.

Vernon was gifted with a beautiful baritone voice and wrote:

“I love music. I grew up in a family that loved music. My mother was a special singer with a beautiful voice and my Dad always whistled.”

Following in those footsteps at an early age, Vernon was in a quartet with his brothers, sang more than 30 times in The Messiah and was part of the College Church choir for 22 years.  His family remembers him singing “The Lord’s Prayer,” “Bless This House,” “How Great Thou Art” and “Under His Wings.”  He is surely singing praises to his Heavenly Father today.

Vernon is preceded in death by his parents, two older brothers, Ralph (LouNelle) and Francis; five nieces and nephews.

He is survived by his wife of 61 years, Rhoda; three daughters, Althea, Arleta (Dave), and Gloria (Marc); two wonderful grandchildren, Derek (Kara) and Sharla (Mark); three beautiful great-granddaughters, Lillian, Eleanor and Mikayla who made him light up with joy; a brother and sister-in-law, Vince (Verda); a sister-in-law, Violet; many treasured nieces & nephews; and cousins, including childhood playmate, Lorraine (Dave).

Vernon loved God, his country, his family and ice cream!

The family is most appreciative of all the care received through K.C. Hospice in recent months.

He was interred in a private family burial service on Wednesday, November 26th, at 1:30 PM at Leavenworth National Cemetery. Arrangements were handled by Heartland Funeral Home, where the obituary can be viewed online.