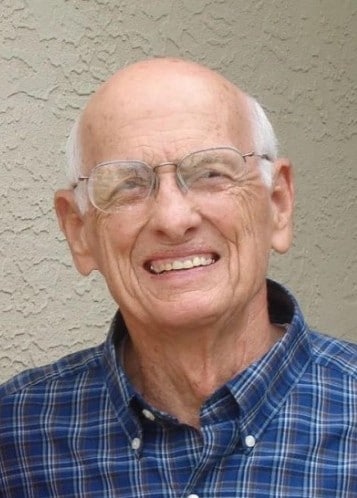 Walter Paul Beck was born on September 10, 1932 to Estella Delear Beck, at 619 West Lexington, Independence, Missouri. Sadly, his father, Walter Paul Beck (senior), a local attorney, died 6 months before Walter was born.  Walter was then lovingly raised by his mother and two older sisters, Annetta and Pauline.   Walter, named after his late father, was nicknamed “Buddy” or “Bud” by his mother and sisters since Walter was such a grown up name for a little shaver.

He grew up in Independence, Missouri and his mother often encountered Harry S. Truman while walking him in a stroller. As the story goes, Harry once peeked in on him and tickled “Bud” under his chin.  Growing up in the Great Depression brought much economic hardship to his family and his mother told stories of putting cardboard in the children’s shoes to make them last longer.  But, being poor did not change his happy childhood and he enjoyed fun times with his sisters and his beloved dog Skeeter.  He had an egg delivery route as a little boy and saved his earnings to buy a motorized bicycle.   His mother remarried when he was 14 years old to Therell E. Thompson and “Tommy” soon became like a father to him. Tommy owned a filling station on Truman Road and Walter worked there as a teenager. During his school days,  his favorite subjects were Math and English grammar. He also enjoyed playing  basketball with his buddies and cruising 40 Highway and Blue Ridge Boulevard in his Ford coupe. Some say he had quite a lead foot, but he laughingly denied any claims.

After graduating from William Chrisman High School in 1951, he worked as a tool and die maker at Bendix Corporation. He was then drafted, during the Korean war, into the Army where he served two years and went to Radar school at Fort Bliss, Texas. He told lots of fun stories and made life long friends from his time in the service.  He also liked to tell stories about some of his former girlfriends, but none were more special than his wife of almost 61 years, Marilyn. He met Marilyn at Hall’s Drug Store, at the corner of Blue Ridge Cutoff and 40 Highway.  Marilyn’s mother was the store manager and Marilyn worked behind the soda fountain. He frequented there often, courting Marilyn and they soon began dating.  They married a few years later at Nativity Catholic Church in Independence, Missouri August 6, 1955. They honeymooned in New Orleans before moving to Lawrence, Kansas where Walter began studies at the University of Kansas.  He was very proud to be a Jayhawk and of putting himself through school. He started there the same year Allen Field House was completed and never missed a basketball game, watching Wilt Chamberlain play.

During their time in Lawrence, they lived at several homes and Walter even worked on the construction of the Kansas Turnpike one summer.  Their first son was born in 1957, and many other wonderful memories were made in Lawrence before Walter graduated with his electrical engineering degree in 1959. Walter, Marilyn and their son Michael then moved to Kansas City, Missouri where Walter took a job at Bendix Corporation (later Allied Signal and Honeywell). Walter was also known as “Walt” and “Wally” at work.  He enjoyed playing basketball, softball, golf and racquetball with work friends.  Away from work, Walter was an active father.  Walter and Marilyn had four sons (Michael, Mark, Matthew, and Mitchell) and one daughter (Melisa Joyce) of whom they were so proud. He was very involved in coaching little league sports and working with his kids on ground balls in the backyard, shooting baskets in the driveway, working on cars with his boys, or even building a boat.  He also enjoyed planning family vacations and planned a big road trip most every summer.  Many wonderful trips were made in those early years with the kids in the white Chevy Impala or the old blue Ford station wagon with the car top carrier. Trips to Grand Canyon, California, Yosemite, Gulf Coast, Galveston, Washington, DC, Yellowstone, the World’s Fair in New York and camping trips were among favorites. Later in life, Walter took up snow skiing with the whole family and enjoyed trips to Colorado, as well as elder hostel trips with Marilyn’s sister, Loretta and her husband Emory, and trips to Michigan to visit his daughter.   At home, he enjoyed building and fixing things. There wasn’t much Walter couldn’t build or fix, and he made sure he did it right, even if it took longer. Among many other things, he built a tree house for his boys when they were small and always had a “project” he was working on. Walter was also an avid gardener. He was often seen whistling, while pulling weeds in his front yard, and sometimes other yards..if they needed it. He prided himself on a finely manicured lawn/landscaping and enjoyed being outdoors. He actually worked for his sons’ landscape company for a few years after he retired from Allied Signal in 1992 (after being a loyal employee for a combined 37 years).  During his retirement years, he thoroughly enjoyed watching his grandchildren grow up and attending their activities. He also enjoyed golfing with his buddies and often his own children, and even participated in a senior league for many years . If he wasn’t playing golf he enjoyed watching golf on Sunday afternoons or recounting every stroke from his recent round.    He was also an avid Jayhawk fan and enjoyed friendly banter with Mizzou fans in the family.  He was most often seen wearing a KU baseball cap (to protect his bald head), and attended some KU basketball games with his daughter in recent years. He never forgot the words to his alma mater/fight song and sang them loud and proud at those games.  He also enjoyed watching the Royals play through the decades and we were sure to let him know the Royals won the World Series this past November, for which he smiled.

In addition to following his favorite sports, his other passion was sweets. Marilyn is an excellent cook and kept him full of good things to eat. He often said that he always ate cookies in “threes”…because one was just not enough. A dish of ice cream every evening, in recent years, was a favorite treat. Last but not least, some of his favorite times in his life were those spent at Lake of the Ozarks. In the early years he took the family to his mother’s little pink farm home on J Road in Roach, Missouri, as well at his sister’s lake home nearby . Walter taught his children to ski and fish behind their little Larson boat, as well as to drive and often “fix the boat” on those trips to lake.  It was during those years that Walter began dreaming of having his own family lake home, and in 1990 that dream was realized.  He wanted a lake home to keep the family coming to the lake (especially after his mother and sister had passed) and to spend time together as they had always done. Because of his dream, countless and treasured memories were made at the lake home over the next 25 years, with his children and grandchildren, and they continue today. He enjoyed boating, fishing, completing renovation projects with his sons, and just spending quality time, as a family, every summer.

Walter was also a long time member of Saint John Francis Regis Catholic Church in Kansas City, Missouri. He was very proud to be one of the original “paint shop” members when Saint Regis had its beginning in Loma Vista shopping Center. He and Marilyn have continued as members for over 50 years where he loved to sing and attend church nearly every Sunday.   Walter will be remembered as a simple, honest, and good man, who was hardworking and selflessly provided for his family. He loved life and was completely involved in his children’s lives.  He was a devoted husband, married to Marilyn for over 60 years and he was very proud to tell you that he had never ever removed his wedding ring. He was also a wonderful son, uncle, brother and grandfather.  Over the years, Walter was known as many things; Bud, Buddy, Uncle Bud, Walt, Wally, Walter, but he was most proud to be called Dad, Grandpa, or Papa. He will greatly missed by all who loved him.

Walter Paul Beck passed away on June 18, 2016 at the age of 83. He is preceded in death by his mother, Estella Thompson, his father, Walter Paul Beck, sisters Annetta Steinberg and Pauline Martin, and his half siblings Opal, Helen and Clarence Beck.  He leaves behind his wife of 60 years, Marilyn Beck, and their children, Michael Beck (Tami), Mark Beck (Barbara), Matthew Beck (Robin), Mitchell Beck (Christine), Melisa Hux (Frank); all of Kansas City.  He is also survived by 10 grandchildren and 3 great grandchildren: Alex Beck, Megan (and husband Kyle) Brethower, Whitney (and fiancee Trenton Vega) Beck, Kristian Beck (and wife Cara), Brandon Beck, Bryce Beck, Sydney Beck, Caroline Hux, Olivia Hux, Josephine Hux, Adrien Beck, Audriana Beck, and Scottlyn Vega. In addition, he is survived by his sister-n-law, Loretta Corrigan, and many nieces and nephews.  A celebration of his life will be held on July 6, 2016 at Saint John Francis Regis Catholic Church, 8941 James A. Reed Road, Kansas City, MO.  A brief visitation will be held from 10-11 am at the church, with a celebratory Mass and luncheon following.  In lieu of flowers, donations can be made to Crossroads Hospice or Saint Regis Catholic Church of Kansas City, Missouri.