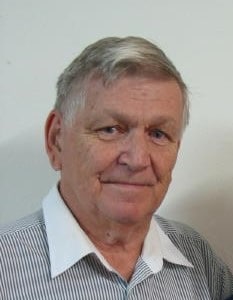 Wayne Edward Colflesh, 87, of Sedalia, Missouri, died on January 10, 2021. He was being cared for at the St. Luke’s Hospice House in Kansas City, Missouri at the time of his passing.

Over the decades Wayne worked as a schoolteacher, coach, principal, and too many other jobs to list. But he is best remembered as a church pastor, most recently at the Pilot Grove Community Church. He was a plain-spoken man who fearlessly preached the gospel.

Wayne loved dogs, buffets, the Chiefs, Ohio State, reading anything and everything, mornings spent with coffee and the newspaper, talking about history, politics, church, and sports. His love of God and His Word kept him preaching and teaching until very near the end of his life. His love of people, not just friends, but strangers who were all potential friends, was evident every time he went out to eat or shop. Family was important as he loved having his grandchildren and great grandchildren visit and he had photos of them in almost every room. The love he displayed for his wife was even greater. He never stopped calling her beautiful. When her health declined, he unfailingly cared for her.

He is survived by four children, Terry and Paul Masters, June and Evin Moore, Mark and Debra Colflesh, Sharon and Kevin Autenrieth, 12 grandchildren and 9 great grandchildren as well as his sisters, Donna McMichael and Virginia “Ginny” Tomasulo.

A Memorial Service will be held at a later date. In lieu of flowers donations may be made to:
Twigs