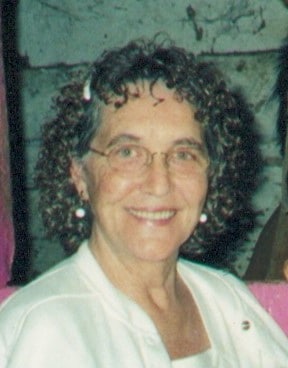 Lynn Shaw (born Inez Linda Nicholson), of Odessa, Missouri, died peacefully in her home on July 14, 2018. Lynn was born at home on the family turkey farm on July 1, 1938 in Amherstburg, Ontario, Canada to parents Carl and Carmen (nee Bastien) Nicholson, and was the youngest of seven children – brothers Francis, Stan, Harvey and Clarence, and sisters Ida and Doris.

Lynn was preceded in death by her parents, her husband Andrew Brownlie, her son Andy Brownlie, great-grandson Finley Sissons, brothers Francis and Stan, and sisters Ida and Doris.

Lynn married Paul Shaw on December 30, 1988 and shortly after moved to Odessa, Missouri. Through their union she gained three step-sons – Ken, Tim (Mary) and Dave (Dana), and step-grandchildren – Zoe, Rebecca, Andrea and Steven.

Lynn had the amazing ability of forming friendships and lasting relationships no matter where she was or what she was doing. This was evident in her many friendships that were formed through attending Alma College, through her career as a top salesperson with Avon, her successful estate sale business, and most importantly her church family.

Lynn grew up a member of the Reorganized Church of Jesus Christ of Latter Day Saints, where her father was a minister and her mom a Women’s Leader. This began her great love for the Lord Jesus Christ and she found it important to pass this on to her children. She lived her religious values in all aspects of her life. She demonstrated some of these values by being a Women’s Leader in the church, playing piano for Sunday services, and being proactive in preserving the written history of the church through her collection of books. Lynn and Paul were active members of the Buckner Restoration Branch, and their church family became a great source of support and love to them.

Lynn will be greatly missed.