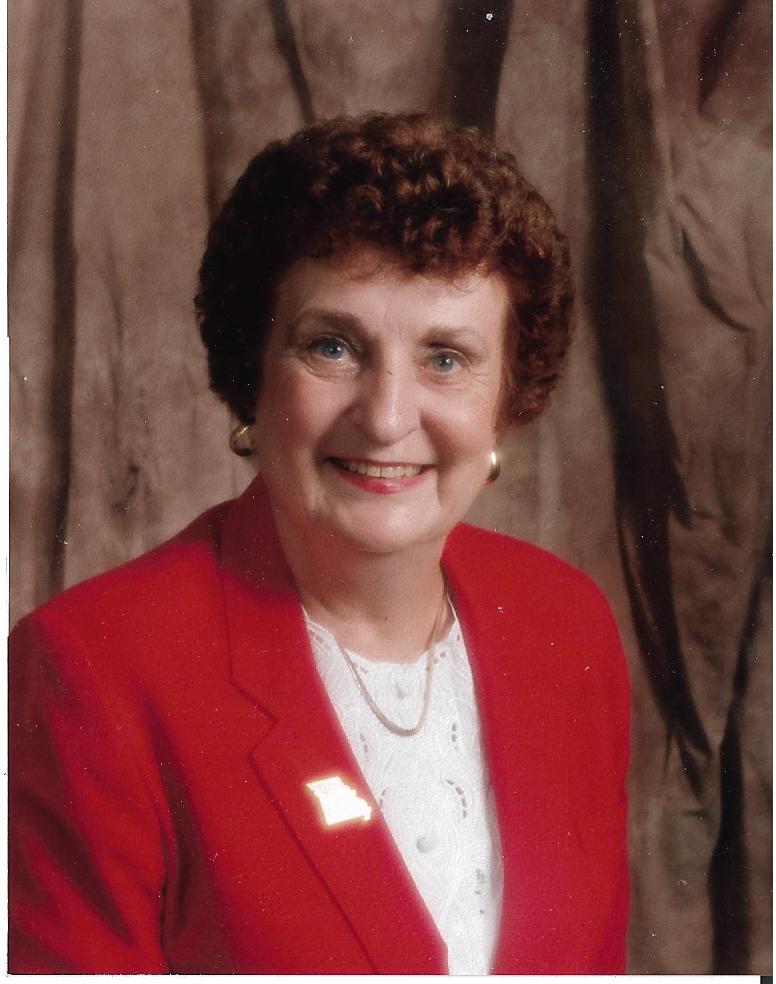 Alyse J. Stoll, was born May 28, 1926 in Kansas City, Kansas to George and Laura Aiman. She was one of seven siblings. She died on August 4, 2020 at the age of 94. A private graveside service for family is planned.

Alyse will be greatly missed by her loving family and the many people whose lives she touched through her untiring volunteer work and service to others. The commitment to improve the quality of life for all was a personal goal, whether it be for young children, teenagers, college students, career-minded young adults, the next-door-neighbor, or those who are to enjoy the golden years of retirement.

She was an honors graduate of Ottawa University with BA degree in Music. Alyse retired after 29 years with the Raytown School District where she substitute taught for many years, before serving as an educational secretary/administrative assistant.

Following are a few of her recognitions for community service: Woman of Distinction award from the Raytown Branch and Missouri’s American Association of University Women (AAUW); recognized by the Missouri Municipal League for leadership on behalf of City and State; the Outstanding Raytown Citizen Award by the Truman Heartland Foundation, honoree as Outstanding 13-YearYouth Friend volunteer; the Outstanding Leader award at the Eastern Jackson County Cultural Arts Coalition Showcase of the Arts; the Missouri AAUW Educational Foundation Named Gift Honoree; Guardian of the Arts Lifetime Achievement Award from the Cultural Arts Coalition of Eastern Jackson County; MRTA Distinguished Retiree Regional Winner; and the AARP Missouri’s Andrus Award for Community Service.

A few of her organization involvements: A past state president of Missouri AAUW, and served as State Funding Vision Chair, having served in other state offices and chairs previously; chair of the K.C. Interbranch Council serving Jackson, Platte, Clay, Cass and Ray counties; active member of the areawide AAUW Networking organization, organizing and directing the Community Arts Festival:Visual and Performing. She initiated and conducted the Women in Math Seminar for high school girls, and established a partnership with the U.S. Women’s Bureau and UMKC in a program of girls, 13-18, GEM-SET (Girls E Mentoring in Science, Engineering, and Technology). At the national level, she served on the Association’s Nominating Committee, and served as the Association’s Leader-on-Loan for conventions in other states. She served as Second Vice President and Recording Secretary of the Missouri Retired Teacher Association and was a past president of the local Raytown MRTA unit.

Music and the arts were a large part of her life. Alyse was Minister of Music and organist in her church for 45 years, taught instrumental music at three elementary schools, served as vocal music and staff accompanist at a junior high and middle school, served as a private flute teacher for many years, and served as treasurer for the Kansas City Flute Association for 14 years. She was active in many music organizations, having organized and participated in the Singing Notables, a school retiree group that brought “entertainment with pizzaz” to many communities, served as coordinator, personnel manager and member of the Raytown Community Band, served as keyboardist for the Raytown Ramblers Band, and organized and directed the RAC Polished Brass ensemble and the Flute Fantasia ensemble.

Alyse established the Raytown Arts Council in 1995, serving as president for many years, and was the executive producer of many summer musical productions. She arranged and staged annual Poetry and All That Jazz evening events, Missoula Children’s Theater kg-8 summer workshops and other arts activities. She also initiated the Fall Fantasy of Arts.

She chaired the Raytown Mayor’s Council on Aging Board of Directors, served as Metro-Arts Council, Vice President of the Eastern Jackson County Cultural Arts Coalition, and served on the editorial committee for the Eleventh Edition of Books for You. She also served on the Truman Heartland Foundation Affiliate Board and served as recording secretary and scholarship chair for the Daughters of the American Revolution. She organized the Raytown Veterans Day celebration for many years. And, she enjoyed working as a Youth Friend, storytelling with kindergarten students. She spent many hours writing skits, articles, and music to promote her organizations.

Alyse was preceded in death by her loving husband of 62 years, Victor E. Stoll. She is survived by her two sons and daughters in law of which she was very proud, Randy (Laura) of Rolla and Ed (Jan) of Lee’s Summit, by six grandchildren, Allison Stoll (Matthew), Erin Stoll, Miller Stoll (Paola), Gretchen Lysaght (Aaron), Kaylyn Stoll (Austin), and Hunter Stoll, and by two great-grandchildren, Max Stoll and Nevaeh Lysaght.

In lieu of flowers, memorial contributions may be made in memory of Alyse Stoll to any of the organizations to which she was so dedicated.