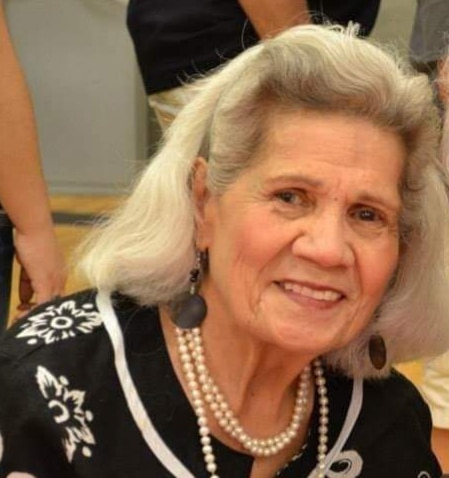 Anna Lupeiaunu’u Ah Mu was born in Apia, Western Samoa July 14, 1937. She is the eldest daughter of Benjamin and Maryann Laurenson. She grew up in Savai’i, Samoa in the village of Gautavai. Her siblings include brothers Benjamin “Pesa” Laurenson (deceased), Gilbert Laurenson Tavita (Ginger) of Salt Lake City, Utah, and Ronald Mason Laurenson (Lori-Ann) of Honolulu, Hawaii. Her sisters include Moana Taugavau (deceased), Rachel Mitchell of Fagatogo, American Samoa, and Maureen Laurenson (deceased).

She attended St. Francis Elementary School and then took commercial classes (equivalent to high school) at St. Francis in American Samoa. Upon completion she got her first job at the Fono (Legislature) in American Samoa. Shortly after she moved to New Zealand, where she met and married her husband, Willard Ah Mu, Sr. on February 1.
Anna and Willard began their family in Hamilton, New Zealand. Children born to them include Willard Ah Mu, Jr., Mary Corcoran (Gordon), Anthony Ah Mu (deceased) (Terri), Melvin Ah Mu (Kim), and Mellaine Burris (Michael). They moved to Laie, Hawaii where Asenath Morby (Bryan) was born. In 1971 they finally settled in Independence, Missouri where Adenia Ah Mu, and Benjamin Ah Mu (deceased) completed their family. She was known as a beloved and wonderful daughter, wife and mother. She was also known as “Auntie” to many nieces and nephews and a loving grandmother to twenty grandchildren and seventeen great-grandchildren.

Sister Anna Ah Mu was a faithful member of The Church of Jesus Christ of Latter-Day Saints for over 60 years. She served faithfully with her husband as labor missionaries in New Zealand. Upon completion of the Hamilton, New Zealand Temple, she was sealed to her eternal companion and family on March 9, 1961. She was a longtime member of the Blue Mills Ward in Independence, Missouri. She also enjoyed serving as a Temple Ordinance worker, with her husband, in both the St. Louis and Kansas City, Missouri Temples. She will forever be known as a faithful servant of our Heavenly Father and Savior Jesus Christ, whom she loved with all her heart.

Our beloved wife and mother, Anna Lupeiaunu’u Laurenson Ah Mu passed through the veil peacefully on Friday, November 29, 2019 in her home, surrounded by family who loved her.

Donations may also be made in Anna Ah Mu’s name to any relief organization battling the outbreak of measles in Samoa.
https://www.mfat.govt.nz/en/aid-and-development/disaster-and-humanitarian-aid/samoa-measles#Help