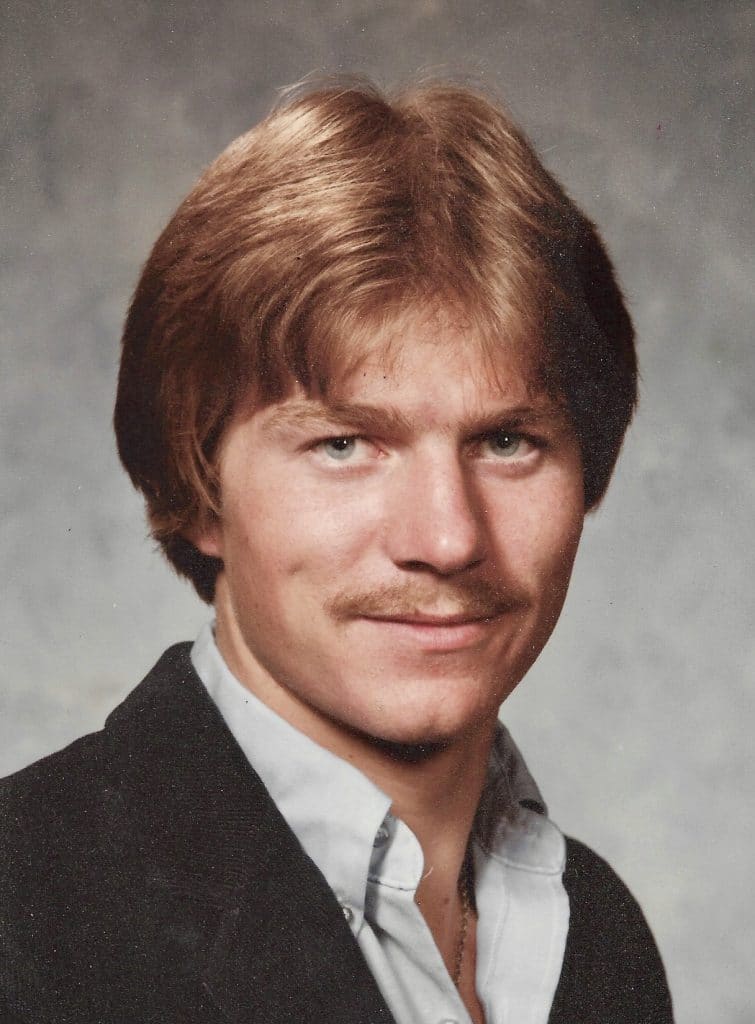 Armon Joseph “AJ” Scheetz passed away in Overland Park, Kansas, on November 26, 2021, at age 56, from complications following a medical procedure.

AJ was born on April 18, 1965—Easter Sunday—in Norton, Kansas. His Easter birthday earned him the nicknames of “Easter Bunny” and “Bugs”—sobriquets that became particularly fitting after he broke his upper front teeth (by crashing his bicycle into a Bobcat bulldozer at age 8) and had them replaced with sparkly silver caps.

AJ was named “Armon” in honor of a highly regarded local priest, Armand, and AJ’s Uncle Norman. By eighth grade, having grown tired of other monikers (especially “Armon Hammer Baking Soda”), AJ began going by his initials and refused to answer to anything else, although he made exceptions for older relatives (and for the one guy in town who did not hear very well and called him “Ermine”).

AJ graduated from Lenora High School in 1984, where he had received vocational training in engines and agricultural equipment. Over the course of his life, he was a jack of many trades; an intelligent but non-traditional thinker, he learned through observation, self-education, and tinkering (lots and lots of tinkering). His knowledge of mechanics and current events was encyclopedic, and he could proficiently discuss a myriad of other topics, including computers, farming, and construction. He served as chief IT support, technology consultant, and mechanics counselor to many family members and often provided useful advice and assistance on DIY projects.

AJ likewise often served as the family chef. Naturally talented, his specialties included NASCAR chicken, smoked meats, and anything that could be grilled (including peaches and asparagus). He also enjoyed bread-making and regularly maintained a sourdough mother.

AJ’s love for cooking was only surpassed by his love for eating. He was especially enthusiastic about spicy foods and hot sauces. (But let’s not talk about wasabi, which turns out to have an unexpected kick when eaten by the spoonful.)

Always a biker at heart, AJ was consumed by wanderlust in his younger years and traveled throughout North America, from Alaska to Mexico and from the East Coast to the West Coast. In later life, AJ’s favorite hobby was fishing; he often took the littles in the family to a neighborhood pond and taught them how to bait a hook and cast a line. Additionally, AJ was an American motorcycle and classic car and truck enthusiast who enjoyed rebuilding old engines whenever he could. When he wasn’t fishing, cooking, or tinkering with engines or computers (did we mention the tinkering?), he liked camping, bicycling, and creating or enhancing items with wood, leather, ropes, or cords.

AJ was also a gentle jokester; his alter ego, Joe from Joe’s Bunny Barn, would frequently leave relatives messages demanding bunny pickups or exclaiming over bunny population explosions.
AJ enjoyed movies, TV shows, and books on tape. His preferred genres were science fiction and fantasy. He was secretly a huge fan of Sarah J. Maas and always awaited the publication of her next book on tape with anticipation.

AJ likewise was an avid fan of the Kansas City Chiefs and Kansas college football teams. Husker fans in the family could expect a gloating voicemail from Joe’s Bunny Barn describing the sad, dejected state of their bunnies whenever the Huskers lost (yet again).

AJ’s fashion tastes ran heavy on the camouflage (with a sprinkling of sherbet-colored and red dirt shirts for variety). His fashion sense reflected his personality: he always wanted to be present at family gatherings, but mostly preferred to blend into the background rather than be the center of attention.

Above all, AJ loved his family. He was a protective older brother and terrific uncle and great-uncle who relished spending time with the children in his extended family. When visiting his nieces and nephews, he delighted in hiding pieces of wrapped gum and candy for them to later find. At the time of his death, he was looking forward to meeting his newest “toy,” a great-nephew expected in January 2022. He always kept a library of the latest children’s movies on hand; it gave him great joy to experience these videos with youngsters and watch them through their eyes, no matter how many times he had seen the movie already.

AJ was raised in a family of faith, and he believed in Jesus all his life. He took part in many family events that centered on prayer. Baptized and confirmed Catholic, he later sometimes assisted with running sound and light equipment at Hope Alive Church during Sunday services.

AJ will be greatly missed by his surviving family members, who include his mother and stepfather, Jane and John Cassidy of Overland Park, Kansas; sister and brother-in-law Carla and Doug Luffman of Eudora, Kansas; sister Monica Scheetz of Orange County, California; sister and brother-in-law Kim and Matt Wilson of Garner, Iowa; brother Matthew Scheetz of Andover, Kansas; stepsister and stepbrother-in-law Debbie and Richard Batliner of Lee’s Summit, Missouri; stepsister and stepbrother-in-law Shery and Robert Batliner of Lee’s Summit, Missouri; and stepbrother Dennis Cassidy of Independence, Missouri. He is also survived by many nieces and nephews and great-nieces and -nephews. His loss will be felt most deeply by the nieces and nephews he watched grow up, the Luffman children: Kelsey (Michael) Beck of Raytown, Missouri; Sadie Luffman of Olathe, Kansas; Josh (Madison) Luffman of Shawnee Mission, Kansas; Audrey Luffman of Eudora, Kansas; and Steven Luffman of Eudora, Kansas. He will also be missed greatly by his Nebraska relatives, Andrea (Bryan) Carroll and Olivia and Stella Carroll.

AJ was preceded in death by his father, Donald Scheetz of Clyde, Kansas; his brother John Scheetz of Yuma, Colorado; and his grandparents, Leonard and Marie Scheetz of New Almelo, Kansas, and Aloysius “Ollie” and Ruth Wahlmeier of Norton, Kansas.

The family welcomes either flowers or donations in AJ’s memory to any of the following organizations: Hope Alive Church in Overland Park, Kansas; St. Joseph Catholic Church in New Almelo, Kansas; or the Santa Fe Trail Chapter of Bikers Against Child Abuse (bacaworld.org).