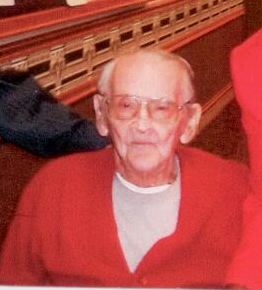 Cremation has taken place and a memorial service will be held on Saturday, August 18, 2012 at 3p.m. at the Kingdom Hall of Jehovah’s Witnesses, 301 W. Smiley Lane, Columbia, MO.

Carl was born September 6, 1915, the son of the late Ralph & Amy (Aldrich) Estes in Blackstone, MA.  He married Eve Maude Brett September 6, 1943 and she preceded him in death.  He worked at several different hospitals as a lab & X-Ray Technician.  He also worked at the post office in Columbia.

He was baptised as one of Jehovah’s Witnesses in 1952.  He enjoyed reading the Bible everyday and sharing his beliefs with others.

Carl is survived by his three children; Pat (Bob) Stone and Barbara Hodge, both of Columbia, MO, and Richard (Sue) Estes of Walnut; two sisters, Ida Parker of Bellingham, MA and Sue Soboluski of Lakeland, FL; eleven grandchildren, as well as 10 great-grandchildren.