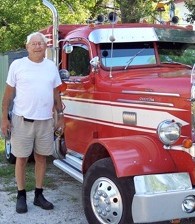 Carl Allen Seip, age 83, of Millersburg, Missouri, died at his home, surrounded by his family, Sunday, June 10, 2012 of non-Hodgkins lymphoma, the cancer he had fought for 13 years.  He was born September 29, 1928 in Harrisburg, PA to Arthur and Purmah Seip.  He met his wife, Barbara Richardson, while he was stationed in England serving in the US Army, and they married February 28, 1953. Carl’s parent’s, and wife preceded him in death.  Carl was a loving father and grandfather and is survived by five children; Wendy (Kelly)Coan, of Colorado Springs,CO, Lisa(Bryce) Edwards, of Columbia, Robyn(Bill)Frame of Fulton, Christopher Seip of Clarksburg, and Julie(David)O’Donley of Fulton; eleven grandchildren, Blake and Alex Edwards, Hannah and Olivia Frame, Zachary(Brooke),Haley and Dalton Wilfley, Megan and Madalynn O’Donley, Max Coan, and Caleb Seip.  Carl has one brother, Arthur Seip, and a nephew Gary, of Allentown, PA.

Carl was a mechanic extraordinaire, employed by Marriott and Reed Coal Co., Mottaz Sales, International Harvester, Golden International, Automotive Specialist, and Boone Quarries.  His hobbies were building vehicles such as riding mowers, a jeep, a dune buggy, and Volkswagen beetles for his children.  Carl was most noted for building a mid-sized tractor-trailer type vehicle entitled “86 Special” which was featured in the “Classic Trucks” magazine.  He was a huge NASCAR fan, and celebrated his 80th birthday driving a racecar at the Richard Petty Driving Experience at the Kansas Speedway.

Carl donated his body to the University of Missouri Department of Anatomy.  In accordance with Carl and Barbara’s wishes there will be no services or celebrations.  In lieu of flowers, the family requests donations can be made to the Cancer Research Center, 3501 Berrywood Drive, Columbia, Mo., 65201, or Millersburg Fire Protection District, 4285 State Road J, Fulton, Mo 65251.