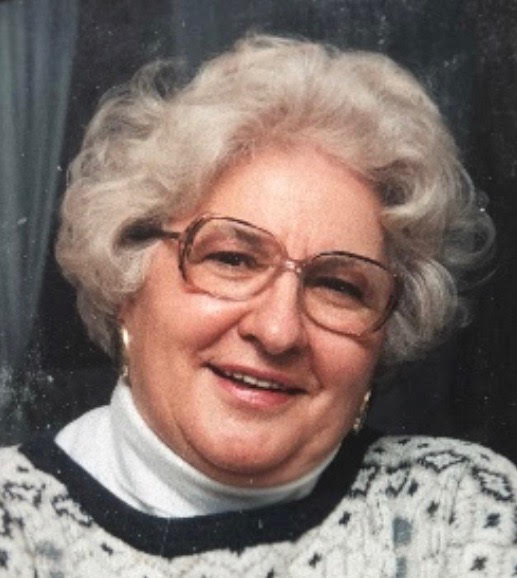 Caroline Richey died peacefully on December 16, 2018. Caroline Schmitt was born December 3, 1926 to George Schmitt and Loretta (Grauberger) Schmitt in Kansas City. After graduating from high school, she worked in a downtown Kansas City bank where a good friend convinced her to take the train to visit her friend’s home in Kahoka, Mo. Her friend subsequently returned to Kahoka for marriage and convinced Caroline to come visit the Deputy Sheriff, Joseph Richey, who wanted to meet her. Initially skeptical, she returned to Kahoka and met this young man. Caroline shared, “I am sure he thought he had met Marilyn Monroe”. That first visit led to a whirlwind courtship that ended with a proposal at the county fair, marriage later that year, and a move for this city girl to Kahoka in 1947.

Life was good until Joe came down with Polio in 1952, which resulted in hospitalization and extensive rehab that left him wheelchair bound. Despite the hurdle, Joe successfully ran for County Collector, and with Caroline, they raised four children. Caroline was a devoted wife, mother and grandmother. When Caroline returned to Kansas City in 2005, she had many good times including working a stint at Royal’s stadium that she loved. She was the life of the party when family and friends gathered recently from far and wide to celebrate her 92nd birthday.

Caroline is preceded in death by her parents and husband and 4 siblings Loretta Hensley, George Schmitt, Dorothy Paskon, and twin brother, Clarence Schmitt. Caroline is survived by her son Stephen Richey and daughters, Deborah (Gary) Markenson, Pamela Richey, and Lisa (Mark) Crawford. She adored her 5 grandchildren and 3 (soon to be 4) great grandchildren. They felt blessed to have such a special lady in their lives.

Caroline leaves a legacy of kindness, gratitude, unconditional love for family, fearlessness, and joy of life. Donations in her memory may be sent to the St. Luke’s Hospice House, 3516 Summit St, Kansas City, MO, 64111, which provided compassionate and comforting care during her final days.