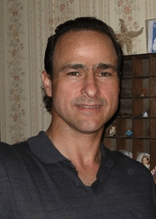 Claude Henry Hinkle III, age 58, of Louisburg, KS died June 5, 2021, at Topeka Center in Topeka, Kansas after an extended battle with ALS. Later in his life, he shortened his name to his initials “C.H.” Hinkle III.

C.H. was born September 10, 1962, to Claude and Joyce Hinkle in Appleton City, Missouri. He moved to Paola, Kansas with his parents and went to Paola schools until he graduated from Paola High School in 1981. After graduation, he attended Washburn University in Topeka and played on their football team. He moved to Texas in 1987 where he lived for approximately 10 years. He worked for Texas Instruments in Lewisville, Texas for many of those years until he returned to Kansas and lived in Louisburg. He worked at QuikTrip and other jobs in the Louisburg area.

Besides spending time with friends and family, C.H. enjoyed the outdoors, fishing and hunting. Later in life, he learned to play the keyboard and especially enjoyed singing songs of praise to Jesus, his Lord and Savior. C.H. enjoyed going to church and learning more about God’s love. For the past 9 years, C.H. cared for his mother after his dad died. It was one of the accomplishments in his life that he felt very purposeful about.