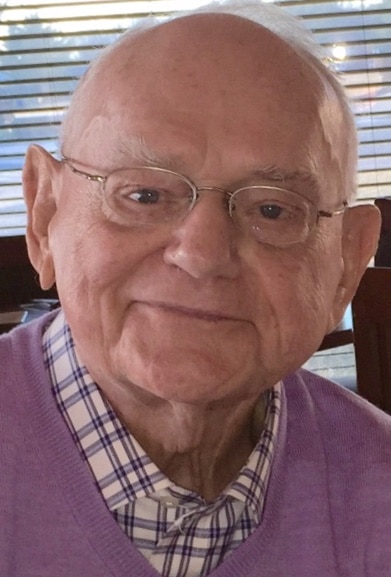 The man who desired “peace in God’s presence,” has arrived in heaven to join his beloved wife. Dayle Elwood Garrett passed away on June 11, 2019 at his home in Columbia, Missouri.

Dayle was born on September 16, 1919 in Money Creek Township, McLean County, Illinois, the son of Sanford and Kittie (Hefner) Garrett. His siblings, Cecil Clifford Garrett and Mozelle Garrett Wilken, preceded him in death.

He was married to Florance Louise Berner Garrett for 65 years having met in choir at the First Presbyterian Church in Bloomington, Illinois. She passed away in 2009.

After graduating from Lexington Community (Illinois) High School, Dayle attended Illinois State Normal University and graduated with a Bachelor of Education in 1942.

As part of “The Greatest Generation”, after graduating college, Dayle enlisted in the Army of the United States on August 29, 1942. He received his Honorable Discharge on November 8, 1945 as Staff Sergeant in the Stockade Military Police Command having earned the Good Conduct Medal, American Theater Service Ribbon and World War II Victory Service Ribbon. Dayle received a Certificate of Commendation for Especially Meritorious and Outstanding Service from Headquarters Camp Patrick Henry, Virginia on November 15, 1945.

During his service to his country, he returned to Bloomington, and married Florance on February 5, 1944. She returned with him to active duty and their first two children, twins, were born at the military hospital at a cost of $7.00.

Dayle returned from active duty and joined State Farm Insurance as a life underwriter at their corporate office in Bloomington. After several promotions, Dayle was asked to open the new State Farm Missouri-Kansas regional office, in Columbia, Missouri, as the Life Company Regional Manager in 1960. He retired from State Farm in 1983 after 37 years of dedicated service. At his retirement, he was asked what his hobbies were, he replied, “Florance.”

His love of music and beautiful tenor voice opened doors for him during college, his service in the army and several theatrical productions. He enjoyed sharing this gift at weddings, funerals and while singing in church choirs in Bloomington, Columbia and Clearwater, Florida.

Dayle has enjoyed the ability to stay in his home due to the undying care, love and devotion of his daughter, Sharen.

Services for this incredible man, who never judged anyone and accepted all with kindness, will be at 10:00 am on June 15, 2019 at The First Presbyterian Church, 16 Hitt St, Columbia, Missouri. The family invites you to a reception immediately following the service in the Ramsey Center at the church.

Dayle has requested any contributions in his memory be sent to the church. “Well done, good and faithful servant.”