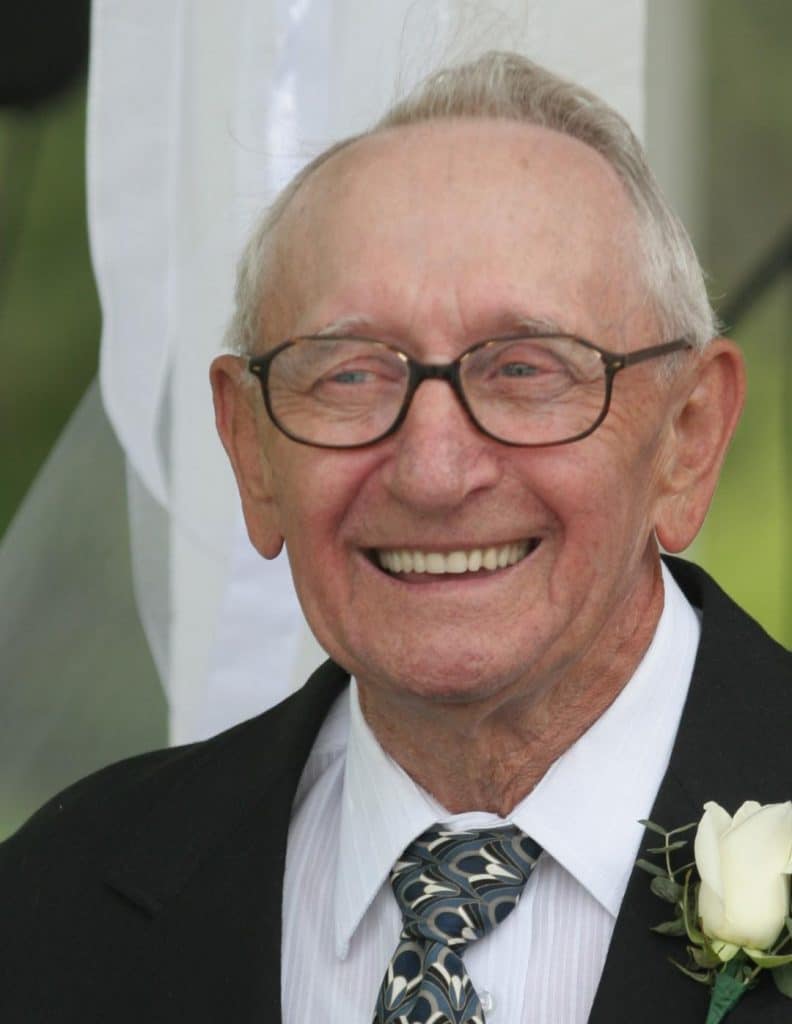 Don M. Breshears, son of William “Jack” and Minnie “Lois” (Brooks) Breshears, was born at his parent’s home in Goodson, Missouri on April 15th 1931.He went to meet his Heavenly father on May 5th 2020, at age 89, in Independence, MO surrounded by his four children.
As one of twelve children, growing up during the Great Depression, Don’s early life was sometimes hard. If you could get him started, he could tell many stories about working hard on the farm or having to get up early to snag a good pair of socks before one of his brothers. Don also loved to share stories about himself and his ornery brothers and their shenanigans—like stealing the neighbor’s apples—as well as stories about his parents. For example, he often said that, despite personal problems, his father was a hard worker. Don’s mother also had a lasting impression on him and two of his greatest interests, farming and faith. His mother, who was blind, weeded her vegetable garden on her knees so she could touch the plants to determine each type. Don continued farming his entire life. Often, Don talked about his mother singing hymns around the house and about hearing her pray. Though, her husband discouraged her from attending church, her faith in God was evident to her growing children. That faith became a centerpiece of Don’s life and like his mother, he was often known to hum or sing hymns while working and to whisper prayers throughout the day.
Don was never shy about sharing his experience of salvation. According to his testimony, at age 14, while he was lying in bed at his parent’s home in Goodson, he prayed to God to help him out of some trouble he’d gotten himself into. When he finished praying, he had God’s assurance that everything would be okay. Since he hadn’t attended church, he didn’t equate this with the term “salvation,” but it was the time and place he made things right with God. He later joined Goodson Missionary Baptist Church and was baptized. Don was also called to preach and was ordained on April 6th 1952 by Goodson Missionary Baptist Church.
On July 10th, 1953, while on leave from the Army, Don married Emma Elizabeth Payne. They had been married for over 65 years when Emma passed away in November of 2018. The couple had four children: Joan, Daniel, Donna and Sharon. Don, Emma and the three oldest children lived in southern Missouri until they came to the Kansas City area for Don to attend a six-month refrigeration course. They didn’t leave when the six months were up and lived in Independence the rest of their lives. Don began doing plumbing work with his brother RT, mostly in eastern Jackson County. Later Don worked for his son Dan’s plumbing company until he retired.
Don and Emma both became charter members of Charity Missionary Baptist Church in Independence, Missouri, and remained members until their deaths. Over the years, Don was pastor for several churches in Independence, Claycomo, Stover and St. Joseph, Missouri.
In the summer of 2000, Don fell doing some plumbing work and broke his left leg. While setting it, doctors discovered a chondrosarcoma in his thigh bone. The only treatment was amputation of his left leg. This was a difficult transition for a 69 year-old, but Don, now using crutches, kept on going. While his family looked on (sometimes in horror), Don climbed roofs and trees, continued to grow masses of fruits and vegetables, took on mowing lawns for his church and family, and helping his children and grandchildren with home repair projects. Though he attempted many times, he regretfully could never learn to drive his little red, stick-shift truck one legged. When family or others asked why he didn’t slow down, he replied, “I ain’t quite handicapped yet.”
Don’s determination to continue in his physical abilities and his faith are what will be remembered. Throughout his life, Don worked hard to serve the Lord, provide for his family, and to be an example of love, honesty and devotion for his family and those he knew. He was also willing to speak his heart. He was actively involved in all his grandchildren and great-grandchildren’s lives as much as he could. Most of all, his family will miss his hog-calling, whistling, giant smile, love of a good deal, and orneriness. He left a lasting impression on those he met.
Don is survived by his four children: Joan Leuty (and late husband John); Dan Breshears and wife Sherry; Donna Breshears and Sharon Breshears; grandchildren: Tiffany Leuty-Winningham and husband Allen; Cindy Martin and husband Justin; Gregory Breshears and wife Traci; Melanie Leuty Blackwell and husband Tim; Cassandra Schmittel and husband Eric; and his great-grandchildren: Miles and Turner Blackwell, Sophia and Alice Breshears, Colby and Taylor Martin, James and Francis Schmittel, and Bailey and Austin Winningham.
He is also survived by one brother, Jerry Breshears; one sister-in-law, Irene Breshears; many nieces and nephews; and his church family at Charity.

Funeral Service will be held on July 11, 2020 at 2:00 P.M. at the charity Missionary Baptist Church in Independence, Missouri.