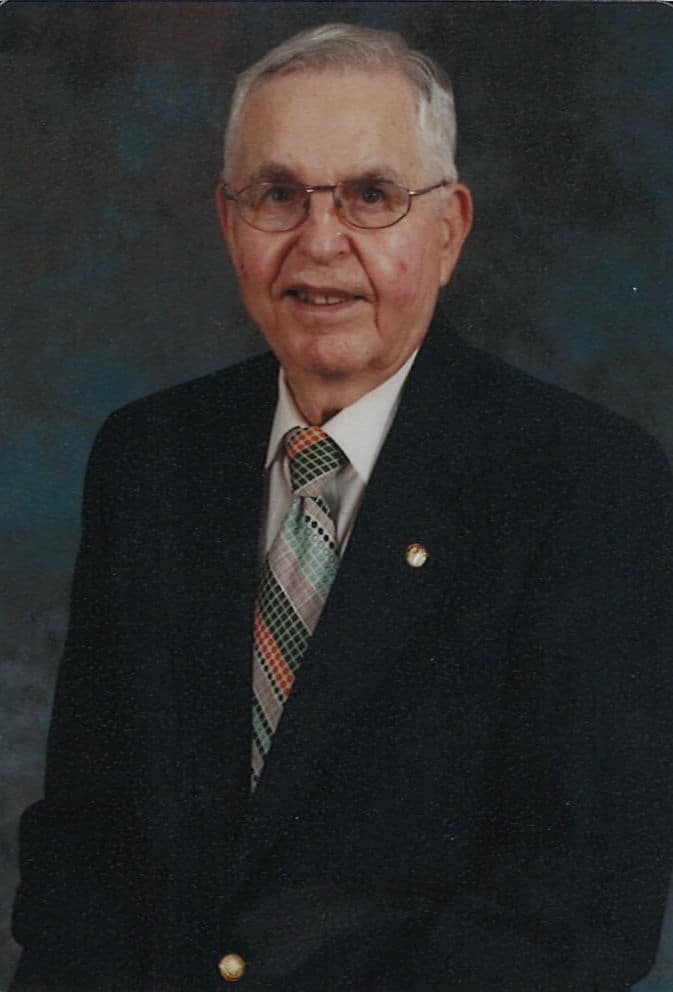 Don Walley, 100 of Columbia, Missouri passed away Wednesday, January 20, 2021 at The Bluffs Nursing Home in Columbia. After three years of asking “where is my Lorene?” Don is finally reunited with her in their heavenly home. How we wish we could have witnessed that joyous reunion, but on January 20, 2021, Don woke up as usual had a good breakfast, watched some TV, had a good lunch and settled into his recliner for his usual afternoon nap. Instead of being awakened by his nurse, he was aroused by a voice he had waited three years to hear.

Don Ulysses Walley was born on December 3, 1920 in Harlowton, Montana, the second son of five sons, born to Percy M. Walley and Lulu Harlan Walley. Don’s life started out on a farm homesteaded by his father in 1915 in Montana. The family moved back to the mid-west in 1924 to settle in Ottumwa, Iowa where he attended grade school and graduated high school in 1940 and it was during these school years that Don committed his life to Jesus Christ as his Savior and Lord at the First Baptist Church of Ottumwa. It is also where he met his future bride, Lorene Christy, but Don and Lorene’s wedding plans were interrupted by WW II, as upon hearing the news of the bombing of Pearl Harbor, Don enlisted into the military. In January of 1942 at Shepard Military Base in Texas he trained as a fighter pilot in the Army Air Corp. but contracted scarlet fever that affected his eyesight and was transferred to the Army assigned to the Water Transportation Corp. He was stationed in the south Pacific on the island of New Caledonia, where he served as a supply Sargent. After four long years of separation, Don received his honorable discharge from his military service and came home to marry his beloved, Lorene on December 16, 1945 in the church where they met.

Don attended and graduated from Iowa State University in 1950 with a degree in Farm Management, and was later employed by the university to manage their test farm in Dow City, Iowa. It was in Dow City that Don started his life as a father, adding two sons to their family, Chris and Bruce. In 1958, he moved the family back to Davis Co. purchasing the Emmanuel Farm, homesteaded by Lorene’s family in 1851 by William Fortune. They farmed this “Sesquicentennial Farm” until retiring and moving into the town of Bloomfield, Iowa.

Don was actively involved in the community. His love for singing and wonderful voice led him to be a member of the Wapello Chiefs Barbershop Chorus for 30 years, and a choir member for several years for the Bloomfield Christian Church. As a member of the Bloomfield Christian Church, he served in several capacities including being an elder, Sunday school teacher, and leading the Evangelism Department. His love for Jesus also caused him to serve Meals on Wheels for community shut-ins, and become the hands and feet of Jesus for others around him and Lorene as they shuttled people to various appointments. He also spent time with the American Legion and served on the Davis County Extension Council.

He is preceded in death by an infant brother Charles. W., his parents, brothers John H. and Edward V. Walley, and his wife of 72 years Lorene (Christy) Walley.

A funeral service will be held at 11:00 a.m., Friday, January 29, 2021 at the Bloomfield Christian Church, 107 N. Davis St., Bloomfield, IA 52537. The casket will be open one hour prior to the service at the church. All attendees are required to wear face masks at this service. Burial will follow in Brooks Cemetery in rural Ottumwa, IA.