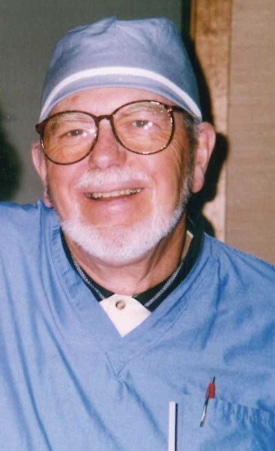 Dr. Robert J McCollum DDS MSD (Dr. Bob), beloved husband and father of Lees Summit, Missouri entered the kingdom of heaven peacefully on Wednesday, January 15, 2020 with his loving family by his side. He was 89 years old.

Dr. Bob was born in Kansas City, Missouri and attended Westport High School. He went to UMKC and graduated with a BS in Chemistry and Biology. He received his DDS while attending the University of Missouri Kansas City School of Dentistry and was then chosen for the Oral Surgery program. While there, he received his MSD in Oral Surgery and Maxillofacial Surgery.
Dr. Bob’s career accomplishments included; President of the KC Society of Oral Surgeons, member of the American College of Oral Surgeons, the Midwest Society of Oral Surgeons, lifetime member of American Dental Association, KC Dental Society, the American Laser Society and was on staff at many hospitals all around the Kansas City area. In honor of his career, Dr. Bob received many awards. One special award recognized 55 years of dental service by the state of Missouri. He had Oral Surgery offices in Independence, Kansas City, North Kansas City and Raytown. With the assistance of his wife and loyal employees, he was appreciated by his patients for being a truly caring and compassionate doctor. He was even known to calm patients with his beautiful singing voice before surgery.

His passion for life was contagious. He lived out Shakespeare’s words and embraced the “journey” of life in all things. He was an avid golfer with “11 holes-in-one”. He loved hunting, sailing, coaching swim team, fishing, racing SCCA cars, and woodworking completed in his impeccable workshop (Patty called the “mole hole”). An accomplished trumpeter and crooner, we can all still hear him serenading us with a favorite song of his, “Danny Boy”.

His relationship with God was of utmost importance. Out of his love for God, loving his family was his number one priority. He was a major influence helping each one of his children achieve their dreams. As a father he was always eager to help with anything needed, give moral support and treasured every minute spent with his loving wife, kids and grandkids. Above all others, the most inspiring love was that of his love for his wife Patty. Their love was the foundation of the entire family. They were always holding hands up until his final moments. Through his love, incredible stories and teachings, he portrayed the value of honesty, hard work, compassion and love for others. His special spirit will be with us all forever!

There will be a private family burial at Forest Hills Cemetery and the family will have a “Celebration of Life” in the spring. Details are being coordinated and will be shared at a later date.