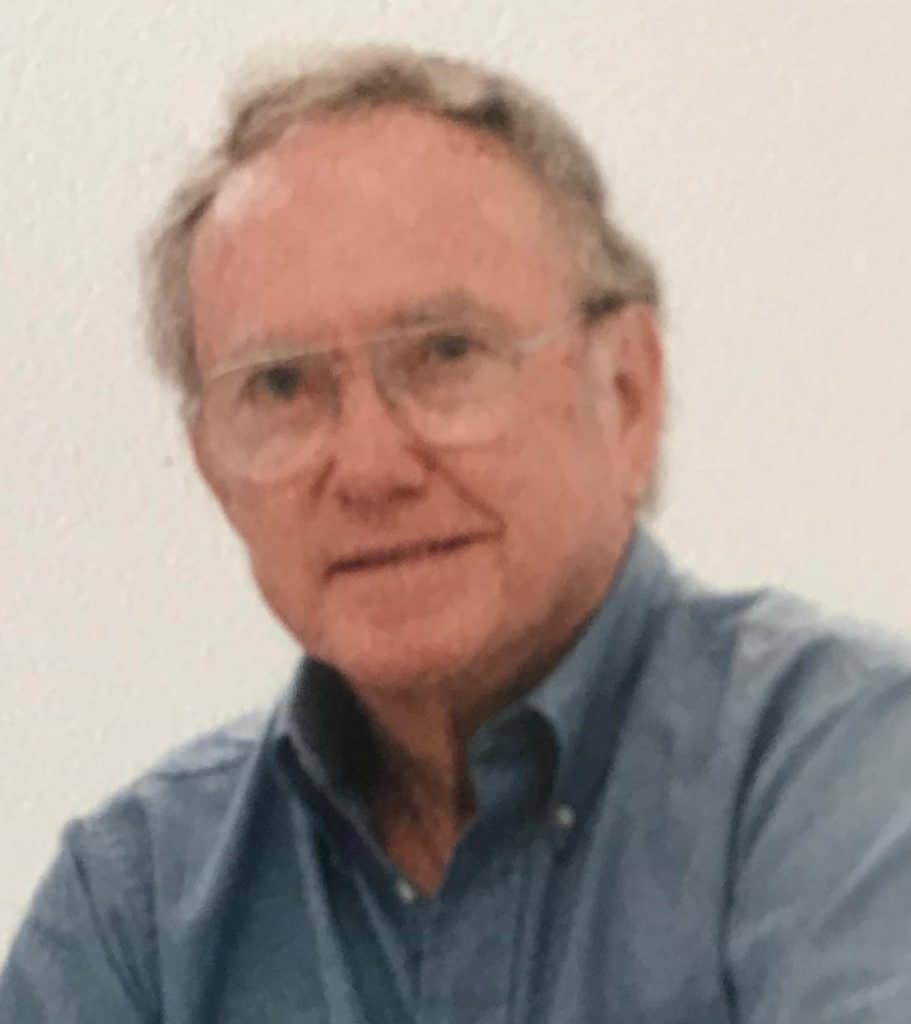 Floyd was born in the southwest bedroom of the Anderson family farmhouse in Delavan, Kansas. He attended elementary school in Delavan, reportedly walking miles through increasingly deep snow drifts (uphill both ways) in between morning and evening chores on the farm. He graduated from Burdick High School at the age of 16. Following High School, he continued to assist on the family farms, worked at Herington Air Base in Delavan, then worked at Beech Aircraft in Wichita, Kansas.

Floyd enlisted in the Army during WWII and was stationed in Korea. He was assigned to work with the Red Cross in Korea at the end of the war and during the time the country was being partitioned. After being honorably discharged in 1947, he returned to Central Kansas and reconnected with Helen Sturgis, who he had known in high school. Floyd had a Model A in those days, and Helen’s Dad had paid him to take her to school in bad weather. After Helen went away to college, Floyd borrowed a car every Sunday afternoon to drive to Lindsborg, Kansas to see her. Since she sang in the Messiah Choir at Bethany College, he spent a lot of hours sitting in the auditorium listening to her singing. Floyd married Helen Sturgis at the Burdick Methodist Church on September 4, 1949. We were blessed with the opportunity to all be together to celebrate Floyd and Helen’s 70th anniversary a week ago with a family picnic on the back deck, complete with cake, homemade ice cream, more than 100 anniversary cards from family and friends.

Floyd worked for Southwestern Bell Telephone Company for over 39 years starting in Salina, Kansas. Floyd, Helen, and their four daughters moved six times in nine years, living in Salina, Clay Center, and Topeka, Kansas, and in St. Louis and Joplin, Missouri. During that time, Floyd served in many roles for SW Bell – as a roving lineman, cable splicer’s helper, maintenance lineman, and telegraph repeaterman in Western Kansas, a cable splicer in Salina, a toll testboardman in Salina, wire chief in Clay Center*, chief toll testboardman in Salina (moved back again), plant network manager and facilities supervisor in Topeka, practices supervisor on headquarters plant staff in St. Louis, and Supervising Service Foreman in Joplin. After numerous transfers and family moves across Kansas and Missouri, he retired in 1986 as District Manager in Kansas City. Before moving up into management, Floyd was a proud union member of Communication Workers of America Local 6411, serving as secretary-treasurer and representing his local at national conventions between 1953 and 1960. Helen accompanied him on all of those trips and assisted him with his local union duties.

A life-long learner, Floyd took advantage of technical and managerial training, completing a diploma in “Practical Telephony” and acquiring a radio/telephone operator’s license from the FCC. He also attended Kansas Wesleyan University in Salina, Kansas, Florissant Valley Community College in St. Louis, and Ottawa University in Kansas City to further his education.

Floyd and Helen also were active in their daughters’ education, supporting their hopes and aspirations and encouraging (pushing) them to reach their full potential. The house was full of books, magazines, and encyclopedias. Dad woke his daughters up every morning by standing in the hall outside their bedrooms, saying, “RISE AND SHINE! Today is a beautiful day, a fine day full of opportunities for education, chances of advancement in your field…” We aren’t sure there was an end to this exhortation since it continued until all eight feet hit the floor. It certainly motivated us to get up quickly. Although Floyd was not a musician, he loved music and happily paid for music lessons for all four daughters and sat through many, many recitals and performances over the years.

Floyd’s commitment to service in the community was reflected through his adult life through membership in civic groups like Jaycees, Rotary, Lions, and Elks. Floyd and Helen were active square dancers and belonged to multiple bridge clubs. He was an avid reader, particularly about history and trains. Floyd enjoyed cards and games, loved playing bridge with friends, gardening, and traveling. Floyd and Helen loved vacations with family and friends, traveling across the United States and in Europe. A very special trip for Floyd was participating in an Honor Flight to Washington DC in October 2012 with a planeload of World War II Veterans and accompanied by his grandson Andrew.

Floyd’s volunteer interests particularly coalesced after retirement into a focus on church and social support services for seniors. The Anderson family attended Methodist churches regularly. When the family was transferred, locating a new church home was always a high priority. Floyd served on committees and acted as trustee for several of those congregations. Floyd and Helen saw to it that all four of their daughters attended Sunday School, participated in MYF, and had the opportunity to attend youth camps. The family moved to Kansas City in 1969, transferring their memberships to Blue Ridge UCM and joining in the fellowship of that congregation. Although his health limited his participation in recent years, Floyd continued to stay in touch through his many friendships at Blue Ridge and through the continued participation of Helen, Jennifer, and Joyce in the life of the church.

In retirement, Floyd also was very involved in Shepherd’s Center of Raytown (SCR). Initially recruited as a volunteer driver for SCR’s Meals on Wheels Program, he went on to serve as a trustee, as vice president, and then president of the SCR Board of Trustees. Elected to the board of Shepherd’s Center of America (SCA), Floyd traveled to national meetings and conferences and chaired the group’s national conference in Kansas City in 2003. He also served on the SCA Committee for Marketing and Expansion and MO-KAN regional planning committee. In 2006, he was recognized with Shepherd’s Center of America’s Outstanding Volunteer Award. In 2013, in recognition of Floyd’s devotion and commitment over 17+ years, Shepherd’s Center of Raytown established the Floyd Anderson Distinguished Volunteer of the Year Award and presented him with the inaugural award. He continued to serve on the Advisory Board of SCR until his death, following the newsletters and financial statements, and asking “What’s new with Shepherd’s Center?” on at least a weekly basis.

He was preceded in death by his parents, Theodore and Irene Anderson of Salina, Kansas and his brothers, Everett Anderson of Topeka, and Wayne Anderson of Kansas City via Oakland, CA.

In lieu of flowers, donations may be made to Shepherd’s Center of Raytown or Blue Ridge Blvd UMC.