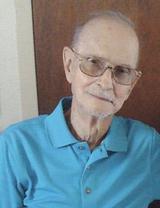 Frank (Gene) E. Tackett, 80, of Galena, Kan., passed away July 24, 2012, in Kansas City, Mo.
Visitation will be from 1 to 2 p.m. on Saturday, Aug. 11, at the Grace House, 1302 Main Street in Galena. A memorial service will follow at 2 p.m.  He has been cremated.
Frank was born on June 23, 1932, in Wichita, Kan. and grew up in Galena. His parents were Anna Mae and George Tackett. He graduated from Galena High School.  Frank enlisted in the US Army and served for four years. He was stationed at the Panama Canal during the Korean War.
Frank married the former Rosalee Price on June 10, 1952, and they recently celebrated their 60th wedding anniversary. He retired from Campbell 66 Trucking Company after 35 years.

Frank is survived by his wife, Rosalee; and four children, Cheryl Herrelson, of Shawnee, Kan., Frankie Kilpatrick, of Joplin, Mo., Ed Tackett, of Riverton, Kan., and Frank Tackett, Jr., of Ocala, Fla.; He is also survived by nine grandchildren.