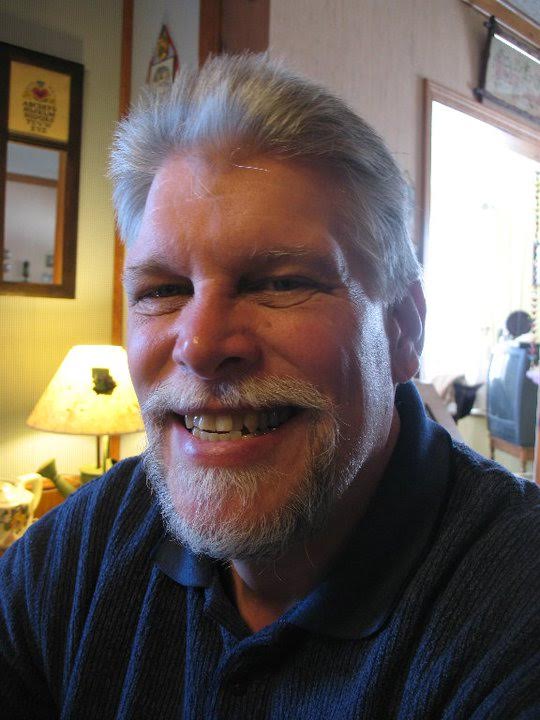 Fred W Hoffower, 61, died at 5:15pm on Sunday, May 28, 2017 in the loving arms of his family. It was a sunny and warm spring afternoon, the perfect time for Fred to leave us as he hated cold weather. There will be a party at the family home to celebrate Fred’s life on Saturday, June 10, 2017. Contributions to the family for medical expenses are appreciated.

Fred was born on Monday, October 10, 1955 in Denver, CO to his parents Fred and Lona Hoffower and big sisters Sandy and B.J. He grew up in Denver and Littleton and moved to Orlando with his family in 1968. He graduated from Winter Park FL High School in 1973 and from Valencia Community College in 1975. The happiest days of his life were when his son Bryan and grandson Atrus were born and when he married Lorraine and became Dad to Eric. He loved his family with all his heart. Fred spent most of his work life as a draftsman, designing and drawing houses that he joked he couldn’t afford to live in. He was a diligent worker and paid great attention to detail. He was laid off in 2010 during the recession and began volunteering with Bridging the Gap and as a driver for Community Blood Center. He worked as an Usher for the KC Royals during the 2012 season, and again as an elevator operator for the first home stand of the 2017 season. Working for the Royals was his favorite job and he was thrilled to have worked during the 2012 All-Star Game events. Fred collected model cars, trucks, motorcycles, tanks, and airplanes. He never built the models because he knew they wouldn’t turn out like they looked in his mind – he was that much of a perfectionist. He spent many hours thinking and planning how he would build them, and many dollars collecting them. Fred was obsessed with life-size vehicles, too. If it had an engine, Fred was enamored with it and could identify the type of plane flying overhead by ear and any car from a distance as it drove down the road. He dreamed of owning a Harley-Davidson motorcycle and, though he wasn’t able to achieve that dream, thoughts of his hair blowing in the wind filled his head. He loved to visit any motorcycle shop, sit on the bikes and let his imagination run wild. He read and collected many different vehicle magazines, and used them for ideas for his models. He loved to travel with his wife, Lorraine. They were able to visit 49 states and were scheduled to visit Alaska last year, but Fred was ill. They took a special European cruise in December, and he treasured visits with his sisters in Houston and Phoenix. Fred was dedicated to helping people and was a regular blood donor. Before he was diagnosed with pancreatic neuroendocrine cancer in November 2012, he had donated over 22 gallons of whole blood to those in need. One of Fred’s favorite volunteer activities was working at the photo area at Bikers for Babies. Every year on the day of the event, he couldn’t wait to hear the sound of thousands of bikes revving up. He was also a registered organ donor and donated his corneas after death. Fred had a unique and often goofy sense of humor. He was a professional practical joker and lived to scare and sneak up on people. He also had special way with words; he referred to himself as a “wordsmithy” because he often confused one word for another or made up new words altogether. Fred enjoyed attending Mavericks hockey games with friends. He always took his cowbell to the games and believed there was no such thing as “too much cowbell,” even though his friends disagreed. He was a kind and gentle soul unless you cut him off in traffic and treated all animals with love and compassion.

The family cats, Minty Fresh and Pipsqueak, will miss him terribly. His favorite dog, Choco, preceded him in death. Fred leaves to celebrate his life his beloved wife and best friend of 20 years, Lorraine, sons Bryan Hoffower and Eric Purtee, daughter-in-law Elise Hoffower, grandson Atrus Hoffower, sisters Sandy White and B.J. Southway and brothers-in-law Ken Welsh and Frank Southway, father- and mother-in-law Wes and Jan Purtee, and many other dear friends and family. Fred made an indelible impression on everyone he met. His spirit and laughter will be remembered forever by his family and friends.