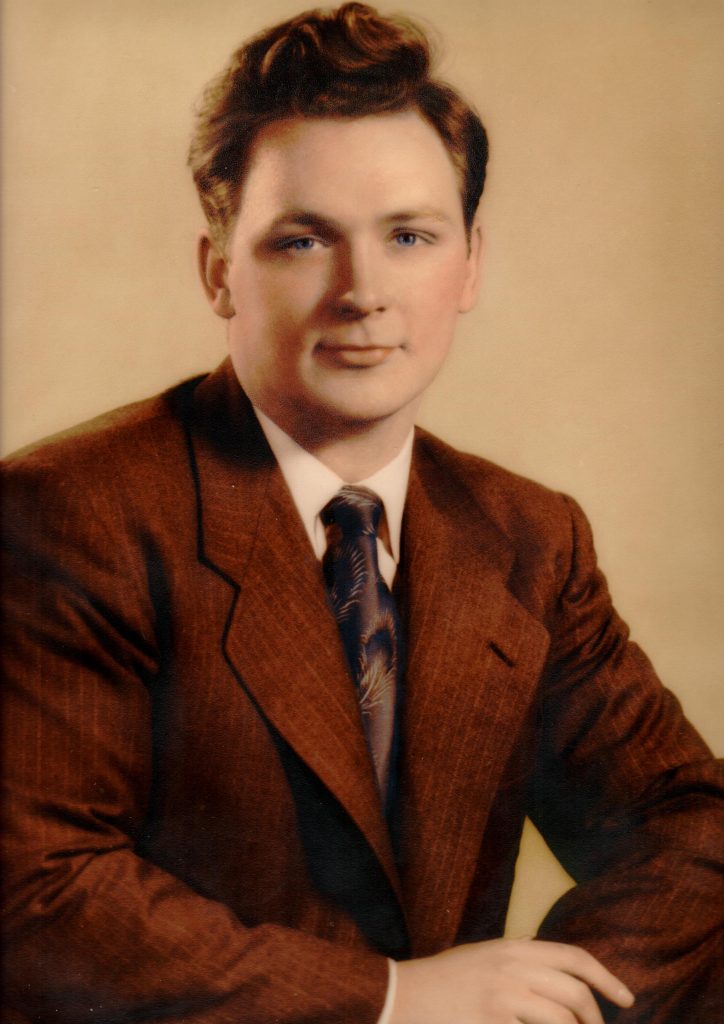 Herbert Miller January 27, 1926 – November 21, 2021, Shawnee Mission, KS, passed on November 21 at age 95. He was born Jan. 27, 1926 in Brooklyn, NY.  He was preceded in death by his wife of over 72 years, Jeanne Miller; his daughter Christine Miller; and his brother Kenneth Miller. He leaves behind three children and two grandchildren.

Herb’s parents fled Estonia in the 1920s, due to the authoritarian oppression of Russia; emigrating to the USA through Ellis Island and settling in Brooklyn, N.Y.  Herb worked as a sportswriter in his late teens, until He enlisted in the Army at age 17 on Jan. 24, 1944, never having been west of the Hudson river. He served overseas in the Asiatic Pacific Campaign and with the Army Air Force in the Pacific Theater of Operations. VJ day was declared on Aug. 15, 1945 and on Nov. 7, 1945 Herb arrived in Japan to serve with the Army of Occupation with assignment to The U.S. Strategic Bombing Survey. He received an honorable
discharge on June 29, 1946.

He attended the University of Wisconsin as well as the University of Kansas. His career circled around and in and out of the various journalism, radio-tv-film industries in the decades following. His first job at age 12 was shelving records at WNYC. He worked at various times for NBC-TV, Bill Burrud Productions, Columbia Pictures/ Screen Gems, and United Press International.  His family grew to four children during the 1950’s. In 1967 a job offer from Screen Gems TV brought him back to the Midwest.  He was given the choice of working out of Chicago or Kansas City. He chose KC and called it home ever since. After his stint with Screen Gems/Columbia Pictures, and Janus Films, he started his own Film Syndication company “Cable Films” in 1976 and offered a collection of over 300 motion picture ‘Classic Films of the ‘30’s &amp; ‘40’s’ to the Cable Television markets and other markets in the U.S. and all around the world. He was a member of the NAB (National Association of Broadcasters) and NATPE (National Association of Television Program Executives). He was an active member of Village Presbyterian Church, the Kansas City Symphony & the Film Society of K.C.

In Herb’s Term Paper for English 1 at the University of Kansas, written in April 1947, he delighted in telling the story of how he met his wife of 72 years, Jeanne Eloise Fruit (b 4-2-1925 d 10-14-2020).  On Christmas Eve, 1944, he was a soldier in the Air Corp, hitching a ride on a B-52 bomber to Chicago.  Due to bad weather the plane was forced to put down at the Fairfax Municipal Military Airport.  He made his way to the Kansas City USO Canteen, where standing at the information desk, he felt the light touch on his shoulder, and was asked “Have you had your Christmas dinner yet?  As Herb wrote, he had always loved to eat and the invitation for perhaps a home cooked meal was very welcomed.  The older gentleman, with the Danish accent, Mr. Lockwood, had made the offer to four other servicemen, and drove them all to his house.  There Herb found 22 other soldiers enjoying a very large Christmas feast. Grandmother “Sweetmama” lived on a farm having an abundance of food as opposed to most people at that time living on war rations. Herb chatted with Mrs. Lockwood, and also noticed a beautiful young woman with long brown hair, who turned out to be Mrs. Lockwood’s daughter Jeanne, about Herbs age.  About midnight the party was breaking up, but since Herb had nowhere to go, he lingered.  The Lockwood’s said he was welcome to stay the night.  He sat up
enjoying the tree lights and Jeanne joined him.  They talked into the night until around 3 and they shared a kiss.  Upon being shown to the guest quarters, Grandfather locked him in his room.  On Christmas day, again the weather was bad and Herb was “forced” to stay, so he was again invited to stay over.  As Herb put it in his paper “So it was that Herb Miller, who loved to eat, came to dinner and stayed 6 days.”  And so he was AWOL and he didn’t care!  He finally had to leave but they wrote many letters to each other, and did finally marry on 2-20-1948, in the Lockwood’s house where he and Jeanne had first met.

Nothing really slowed Herb down, not even his bout with colon cancer at age 60, nor his aortic dissection at age 80, nor his heart attacks with stents, nor his hip replacement surgery.

Herb always lived LIFE the way he wanted to.   He was a people person, always willing to strike up a conversation with anyone and everyone.  He would sometimes talk to the people at the next table in restaurants, saying, “gee that looks great, what are you eating?”  He was a longtime loyal customer of Andres Bakery on the Plaza.  And he was a new customer of the Ashley the Pie Lady at Pryde’s in Westport.  He had even ordered 5 mincemeat pies for Thanksgiving.  He will always be in our hearts.  And if G-d; (and Jeanne) finally let him into where she is, he’ll be very happy