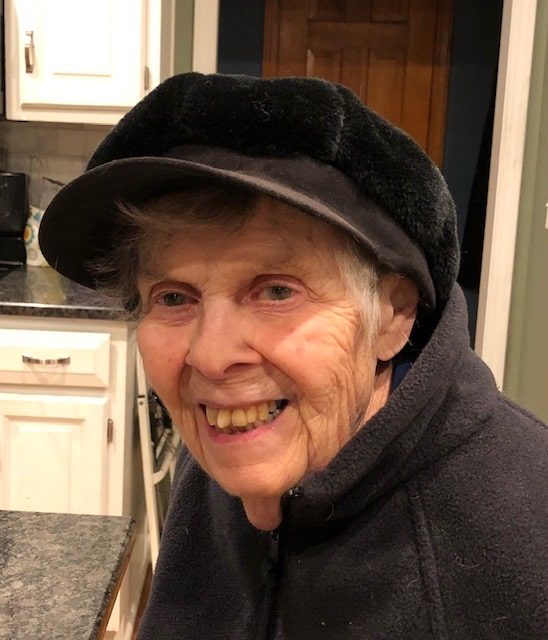 Iona Louise Gibbons, 89, a lifelong resident of Wichita, Kansas; recently residing in Gardner, Kansas, passed away peacefully in her sleep Thursday, May 14, 2020. A graveside burial at Leavenworth National Cemetery will take place Friday, May 22, at 10:00 am. A private family gathering for the immediate family will be held in Olathe, KS on Saturday, May 23rd at 11:00 am. A Memorial Service for friends and family will be held in Wichita, Kansas at Central Community Church on a date to be determined once the restrictions of the Coronavirus are lifted.

Lou was born February 3rd, 1931 in Enid, Oklahoma. Lou and her sister, Dolores, were raised by their mother, Iona Marie Hallet. Lou graduated from Wichita East Highschool in 1950 alongside her best friend and sister, Dolores “Doe” Currie. She worked at Universal CIT in Wichita where she met her life-long friend, Rita Green. Lou met her husband of 65 years on a blind date arranged by, none other than Rita and Larry’s best friend Bob Green. Larry and Lou were married on a Friday the 13th in May of 1955. That gave them the excuse to celebrate their anniversary every Friday the 13th as well as every May 13th.

If Lou set her mind to something, she was determined to make it happen …. Even when it came to family planning. Upon getting married, she secretly told her best friend she’d like to have four children: a blond-haired boy, a dark-haired girl, a dark-haired boy, and a blond-haired girl. And that’s what she got. Lou cherished her children and grandchildren and she stayed at home to raise them. When the kids were older Lou helped Larry in his graphic arts business.

Lou was a lot of fun and always up for a good adventure. A young teenage Lou and her sister would ride the train to California in the summers to visit their father. They would take their very young cousins on trolley rides. Lou created unique experiences for the grandkids: a visit with the pilot in the cockpit, a ride on a firetruck, a visit to see animals unloaded from Barnum and Bailey Circus train, a trip by Greyhound Bus, trips to zoos, simple walks to feed the horse on Charles street… and the list goes on and on.

Lou was willing to take action for what she viewed as a good cause like when she opened the back of a dog-catcher’s van to let out the poor locked up dogs. Or when, upon returning 2 tennis rackets for her friend, Lou talked the JC Penney’s manager into giving her $40 only to find out the total cost of the tennis rackets was actually only $20. Or when she required her children to return all the gumballs they had stuffed in their pockets when the gumball machine broke.

Lou was very petite and was often seen as a sweet little lady with a quiet temperament, but though Lou looked innocent enough… she proved looks could be deceiving. Like the time when she slipped Larry’s driver’s license from the police officer’s clipboard causing the police officer to get so flustered he let Larry go without a ticket. Meanwhile Lou was nudging Larry urging him to drive away and not worry about the driver’s license.

Lou was very generous. If you were a guest visiting her home Lou would have a gift bag waiting at the door to send with you. She received special service from the trash collectors in return for the pop and candy bars she would give them. Lou did, however, have a reputation of skimping on tips.

Lou was a planner; she’d plan everything to the very last detail from family vacations to “This is your life”- themed birthday parties. She loved to host elaborate dinners. The hand-made sign stuck in the butter reading “this is real butter” was evidence of a special occasion. Lou was patriotic; she loved Uncle Sam and the good old red, white, and blue. She had a sassy sense of humor. She was full of energy and always on the go. When she was not on the go, she loved sitting on the porch with a glass of iced tea talking and praying with one of her loved ones. Later in life, she became a cat lover; the cats became her replacement “grandchildren”.

In the last years of her life, though Lou suffered dementia, she remained the same at the core. Her eyes would light up and she would greet you with a big smile, she would express gratitude for your visits, she would give pats of encouragement when you were discouraged.

At the core of Lou’s life was her faith. It was a simple faith, with a simple message. She would spread this message to whoever she met: to strangers in the grocery store, to nurses in the doctor’s office, to neighbors on Clarence Street, to the prisoners she wrote to, and to her family every day. She wanted everyone to know that “Jesus Loves you”! Lou will be missed greatly.

Donations to: Crossroads Prison Ministries or Beauty and the Beasts Cat Rescue.