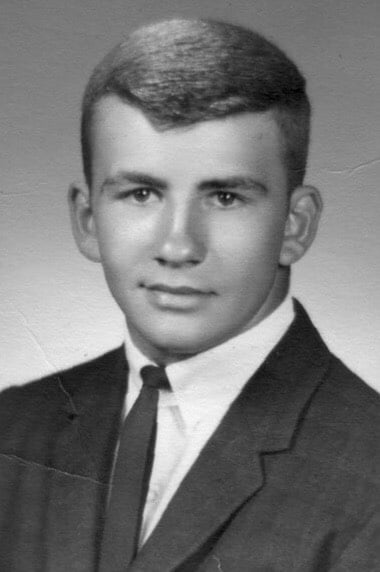 Growing up in Pittsburg, Kansas, Jim excelled at athletics playing baseball, football and basketball. He and his close friend Terry were on the YMCA swim team for several summers, and their freestyle relay team came close to setting a national record. An honor student in high school, Jim played saxophone in the jazz band, sang in the choir and was a member of DeMolay youth organization. When not playing sports or in class, Jim and Terry could be found working in the fields bailing hay: a tough, hot endeavor. They might also be found “draggin’ the gut” in their hotrods up and down Main Street in Pittsburg.

A second-generation Jayhawk, Jim earned his bachelor’s and later PhD. Afterward, the family moved to from Lawrence, Kansas to Bloomington, Indiana, where he was a professor of business for 6 years. He and the family returned to Kansas City in 1986, at which time Jim co-founded a marketing research firm—a career that he enjoyed until retirement. He was also a marathon runner, coach of his kids’ and grandkids’ teams, veteran of the United States Navy and philanthropist.

While in Memphis, Tennessee, Jim met the love of his life, Charlotte, and the two were married for five decades. As the story goes, Jim was attending a loud party with his Navy buddies at an apartment below where Charlotte lived. She was fed up with the noise and went downstairs to tell her neighbors to be quiet. Jim answered the door, and suddenly Charlotte’s knees got weak and she forgot why she was there (to tell them to shut up). Instead, she invited him up for a sandwich. The rest is history. Before and after retiring, Jim and Charlotte enjoyed dozens of trips, celebrations and watching their family grow. More than anything, Jim was a “family man.”

In 2017 Jim gained two more family members: wife Ellen and her daughter Regan. Jim and Ellen took many trips, undertook many activities together and were married at the time of his death.

Matthew and Elizabeth are holding a Celebration of Life service at the Carriage Club, 5301 State Line Road, on Saturday, October 23, 2021 at 1:00 p.m. In lieu of cards or flowers, please consider donating to Jim’s favorite charity, one which he co-founded, After the Harvest. After the Harvest was extremely important to Jim and a big part of his life.  Donations can be made online at After The Harvest Donations