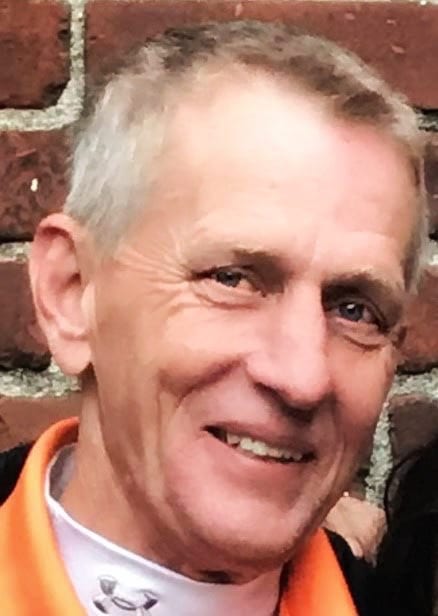 Jerald “Jerry” Victor Hall, 57, passed away Sunday, August 28, 2022. Jerry was born the youngest of three children to Nannie and Earl Hall in Mattoon, IL on October 21, 1964. He worked in the casino business for seventeen years before transitioning into car sales in 2010. He had a passion for helping people and he was able to do that in the automotive field.

As a young child Jerry’s family moved to Kansas City, MO. He met his wife, Carla Gregory, in 1982 at North Kansas City High School where they both attended school. They married on October 29, 1988, surrounded by friends and family. In 1993, Jerry and Carla had their first child, Delaney. 7 years later, they welcomed their second child, Mikinlee “Miki”, into the world. He worked hard to make sure they were taken care of and felt loved every day.

Jerry wore many titles: husband, dad, brother, son, friend, KC Hammer Hall, Late Night Jimmy Fallon, and, perhaps his most well-known title, Coach. He began coaching in the 90s when the son of family friends wanted to play soccer. When Delaney was in second grade, she asked her dad to coach a soccer team for her too. Although a little reluctant to coach a second-grade team, he said yes. Miki was only in preschool when she asked him to coach a soccer team for her and again, he said yes. Jerry dedicated over a decade to coaching both of their teams. Even after Miki went to high school and his soccer coaching days were done, he remained the best coach. He used his coaching skills to be a successful navigator through daily life, tackling projects around the house with Carla, and even spending his Father’s Day teaching his son-in-law, Kevin, how to hit a golf ball.

Jerry loved his dogs. He always claimed he did not want Carla to bring home another one, but they always ended up sleeping in his bed the first night. Although not the best decision, he would sneak whatever he was eating under the table to them. He always said his way of honoring his dogs was to rescue another one and make sure they were spoiled.

Jerry began bowling in the 80s. After many championships, his proudest moment was bowling a 300 game and being inducted into the Bowling Hall of Fame. In addition to bowling, he loved playing Golden Tee. His competitive nature encouraged him to compete in national tournaments. He enjoyed spending his evenings and days off mowing the lawn on his new riding lawn mower and playing games with good friends on his PlayStation. His catch phrase was “I almost had ‘em” and he could always be counted on for “just one more game” of Fortnite.

He was preceded in death by his mom, Nannie, his dad, Earl, and many beloved pets.

In lieu of flowers, family is requesting potted plants.