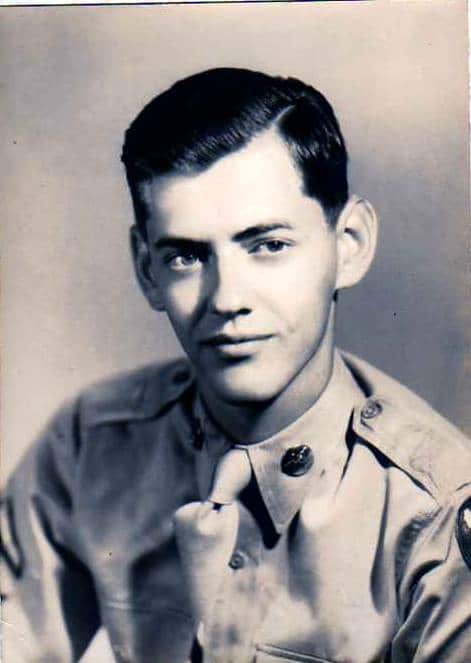 John A. Young, 87, of Raytown, MO, died Sunday, Oct 22nd surrounded by family. John was born in Los Angeles, CA on June 20, 1930, the middle son of John and Lena Young. A veteran of the US Air Force, John served during the Korean conflict. Following his military service, he was employed with IBM as a Field Engineer where he worked on mainframe computers. John married Mary Joann Laughlin in 1957. John is survived by his wife of 60 years, his brother, Dr. Thomas Young (Mary) and seven children, David (Karen), Sharon, Mary Dianne Ratliff (Roy), Tricia Lees (Greg), Terry Holliger (Bob), John (Mary Pat) and Nancy. John has six grandchildren, Mary Nicole, John Christopher, Courtney, Eric, Erin, and Noah and 2 great-grandchildren, John Aiden and Quinn, as well as many loving in-laws, nieces, nephews, and cousins. He was preceded in death by his parents and brother, Robert. Following John’s retirement, he went back to school to learn many crafts, including his second career as a clocksmith. For many years, he was the man to go to for clock repair in the Kansas City area. John owned a map vending service in the 1970’s and enjoyed traveling by car on the backroads of America. John also enjoyed woodworking, was a certified locksmith, a trained auctioneer, and small engine repairman. He was a collector of many things, was full of knowledge on a number of subjects, and was loved by all. Funeral services for John will be at 10:00 a.m. Friday, Oct 27 at Heartland, 6113 Blue Ridge Blvd, Raytown MO 64133, with burial to follow at Mt. Olivet Cemetery. The family will receive visitors from 5-7 pm on Thursday, Oct. 26 at Heartland Burial with a small “celebration of life” ceremony at 7:00 pm. Because of his love of animals, particularly cats, the family asks that, in lieu of flowers, donations are made in John’s name to KC Pet Project, 4400 Raytown Road, Kansas City, MO.