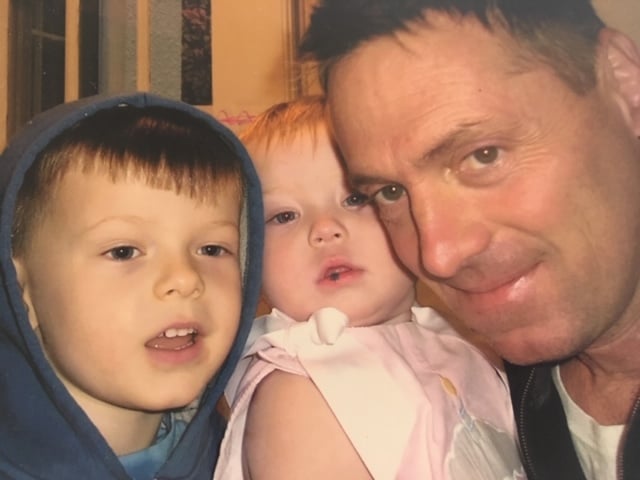 With heavy hearts we share the sad loss of our cherished son, brother, father and friend, (John) Mark Appleberry, 55, who left us too soon Wednesday, April 3, 2019, in suburban Kansas City, MO. Residing most recently in Marshall, MO, Mark was the son of James Appleberry, Louisville, and late mother Patricia Trent Appleberry. Along with his father, Mark is survived by his family, including Maureen Carr, son (James) Doulin, 17, and Cara Muireann, 13, all of Philadelphia; and brother Tim Appleberry and his wife Bridget and their children, Maura, John and Helen, all of Louisville.

Born in Warrensburg, MO, on September 25, 1963, Mark graduated from high school in Pittsburg, KS, and went on to study at the University of Kansas. He completed his BA in philosophy at California State University at Long Beach and earned a Law Degree with honors from Boston University.

His career mirrored his varied interests and talents. Forming his own rock band in college, he and his band mates traveled the college circuits in the U.S. and Canada, eventually landing in Los Angeles. His career there changed focus towards construction/home building, and then to aspirations in the legal field. After attaining his JD, he clerked for Federal Circuit Court Judge Boyce Martin, Louisville. Following the clerkship, he joined the Jenner and Block law firm in Chicago, and then Frost Brown Todd in Louisville with a specialty in mergers and acquisitions. But he had an entrepreneur’s heart and with his brother soon formed Thoroughbred Technologies which was twice recognized as a “Top 100” fastest growing companies in the U.S. (Entrepreneur Magazine). After selling the company, Mark returned his energies to law, working briefly with firms in Ohio and Pennsylvania and freelancing from home.

Mark was a caring, loving and generous soul. In his youth he was a talented athlete and remained a sports fan throughout his life, especially for his beloved Jayhawks and Kansas City Chiefs. Gifted in math and music, he was always creative, continued writing songs throughout his life, loved gardening and nature, and adored his children. He is dearly missed by numerous friends and family.

Services for Mark will be private. Expressions of sympathy can be made to: Fountain of Life Ministries International, P O Box 145., Alma, MO 64001.