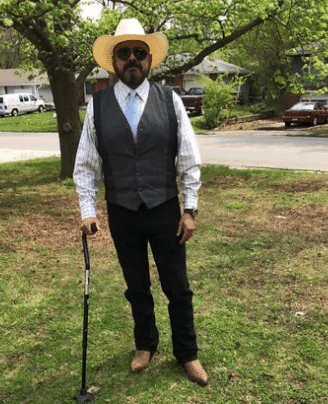 José Angel Rios was born in the small town of Carrizo Springs, TX and moved to Kansas City, Missouri with his wife and kids in 1987.  As a pastor of 25 years, José committed his life to God in his early 30s and built everything around that. His work centered on raising his kids to love the Lord and to share that love with anyone that you meet, which was the example that he set. José was always asking people how they were, about their lives and, as a disciple, if they knew the Lord sharing his testimony of how God found him and saved his life.

Numerous times over the last three years, our family was instructed to prepare ourselves and to say goodbye, but we were constantly reminded of God’s unfailing love as José lived in His favor and always came out on top. José instructed his family to pray and as his doctors referred to it “called the shots on his own terms.” His daughter affectionately referred to him as a “rhino” because his faith and strength kept him fighting. In his bible we see a note that says “Tell the Lord my problems. Let Him handle them and let others see the joy”. Even in his final days, when the pain was excruciating, José never stopped praising God and through the tears he sang “CON CRISTO EN LA FAMILIA QUE FELIZ HOGAR”

José will be forever remembered by his loving wife of 35 years, Maria de Lourdes and their children Bridget, Samuel, Emily, José, Bianca, Anthony, Selina, Gloria, Alexia, Josué, & Jorgé, by the grandchildren he adored, Isaac José, Josefina, Alicia, Lorenzo, José, & Liana Angel, as well as his mother, Concepcion, his Aunt Gloria, and his siblings, Rosario, Juan Enrique, Rosalynn, Teresa, Nerieda, Ambrosio, and Juan Antonio; his beloved extended family which includes many nieces, nephews, cousins, aunts & uncles. He was greeted in heaven by his father Antonio, his sister Lorena and his grandmother Margarita.

José will forever be remembered for his advice and wisdom, which was always founded in scripture, his one-liners and quick comebacks, which he passed on to his kids, his love of movies, reading and despite living in Kansas City for 30 years, his unwavering allegiance to the Dallas Cowboys and San Antonio Spurs. As we celebrate the life and legacy of José Angel we reflect on his two favorite phrases which he always said to his kids “CLOSE THE DOOR!” and “God’s got the last word.” We love you, Daddy.

Dinner to follow 2pm-5pm at the Roger T. Sermon Center