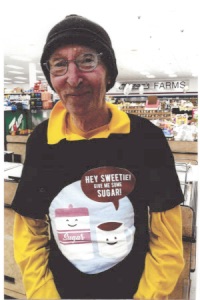 Joseph Dean Cook passed away on December 8, 2020 from complications of Pulmonary Fibrosis at the home of his niece Jennifer (Garry) Garriott. He was born in Columbia, Missouri on April 18, 1956 to Joseph Guy and Milda (Eggers) Cook. He was a 1975 graduate of Hickman High School in Columbia.

After high school he worked several years at Discwasher, Inc. in Columbia and later traveled to Texas and Mexico to train workers when Discwasher moved their business.

His passion was working with plants and flowers for over 46 years. During his years as a florist, he received several awards for his floral arrangements, even traveling to New York City for an exhibition. He began working at the Nowell’s Flower Shop on Worley Street. He co-owned a small flower shop on Walnut Street for several years. After closing his flower shop, he returned to Nowell’s on Keene Street. He stayed when it was sold to Patricia’s and continued to work in the floral department when it was sold to Moser’s. He continued to work in Moser’s Floral Shop until he became critically ill in early November 2020.

He spent his free time riding his bike on the Katy Trail and for many years his goal was to ride from one end of the Katy Trail to the other. He was an avid Missouri Tiger fan. When he was young, he and his sister Pat would go to the games with their dad early on Saturday morning home games, sit on the hillside of the “Big M” and ate country ham sandwiches their mom had made. Throughout his life he never missed a home game or a tailgate party with his friends and cousins before a game and at half time in the south end zone parking lot. He always bought four season passes so that family members could attend with him.