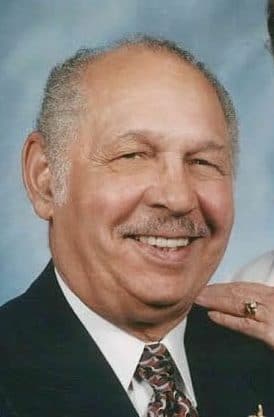 Joseph Leroy Crushshon completed his earthly journey and went home to his Lord on October 15, 2017. Joseph was born May 5, 1933 to Benjamin and Ruby Crushshon in Minneapolis, Minnesota. He is preceeded in death by his parents, two brothers (Benjamin and Roger) and one sister (Corleen Simmons). His survived by his wife(Mary), one sister (Ruby Ramirez) and one brother (Christopher).

For 32 years , Joseph worked in the air flow industries of Barry Blower and Twin city Fan & Blower in Minneapolis, Minnesota. Favorite past times included fishing and camping in Minnesota, listening to old radio programs, and caring for his pet dogs and cat. He and his wife, Mary, moved to Kansas City, Missouri, in 1985, where they remodeled houses for rent until retirement in 1998.

For 25 years, Joseph was Eucharistic Minister at Our Lady of Peace and Our Lady of Lourdes Churches as well as St. Mary’s , Trinity Lutheran, and Research Hospitals. He accompanied His wife to homebound parishioners to receive Holy Communion and was active in supporting the Kobonal Mission in Haiti. He spent many hours in adoration at the Franciscan Prayer Center, Sts. Gabriel and Andrew Churches.

Joseph loved to make people smile through his corny jokes and quick wit. He will be missed by so many especially by his wife Mary. He has reached his desired final destination – home with His Lord and God.