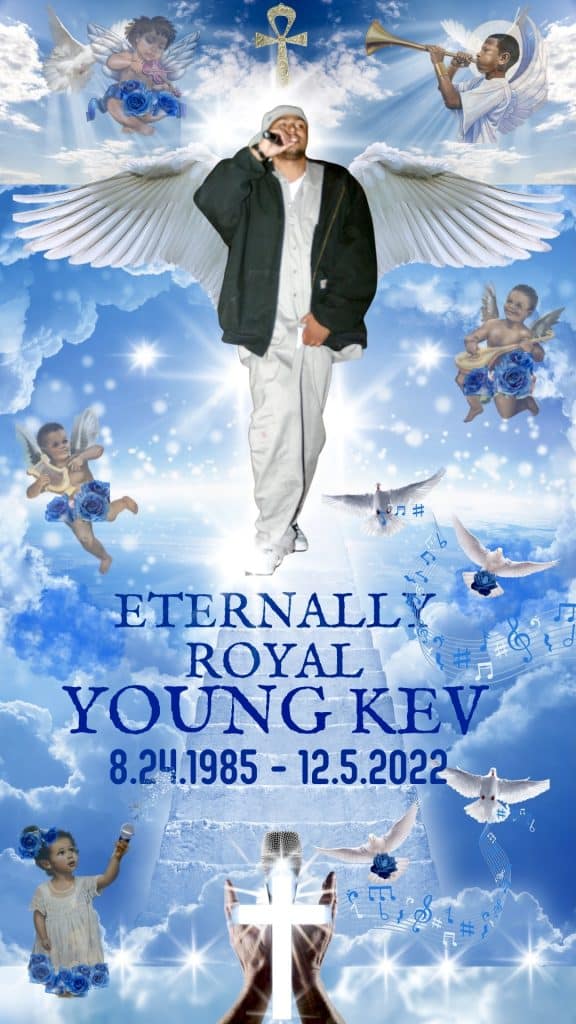 A look back at the life of Kevin Jerome Bratton. Professionally known as Young Kev. Kevin made his first appearance on earth August 24th. 1985. He was born to Nimwindlea and Brian Kevin Bratton, who were overjoyed to be welcoming their first son into the world. Kevin’s sister Luciana couldn’t wait to meet her baby brother and show him off to the world. His sister was affectionately known to Kevin as Sis Si. Kevin would later get the chance at 3 and 5 to welcome his baby brothers Sadiki and Shaka into the world. Although Kevin’s he on earth with Sadiki was limited, there was no shortage in the love that Kevin held for him. Kevin’s goal was to be a lifelong role model to his little brother and best friend to his sister.

At the age of 10, Kevin became an uncle to his niece Kimani, he couldn’t wait to play with her and buy her clothes that matched his Kevin spent most of his early years playing games with his little brother and niece. Kevin loved playing basketball, but baseball won his heart. Kevin’s baseball accolades awarded him recognition for his athletic abilities and team mentality. At the ages of 12, 14, and 19, Kevin welcomed his nephews Osiris, Bennie, and London into the world with open arms. Kevin gave his niece and youngest nephew special nicknames (Snacks or Fancy Mama and Don Luciano).

Although Kevin truly enjoyed sports, he also enjoyed music. Kevin and his sister spent lots of time listening to music, his mother sang backup in 2 reggae bands and Kevin loved attending concerts and going to the music festivals with his family. Kevin learned to play the steel drums and began to write songs with his sister when he was 8 years old. At the age of 12 Kevin discovered that his true passion was making music. Kevin began to write and perform his own raps anywhere that he had a listening ear, this was typically his friends and close family.

Kevin gained his lyrical inspirations from some of his favorite artists and his own life experiences, he poured his heart into his music. Kevin’s dedication to music did not go unnoticed. Managed by his sister Kevin began his professional music career at the age of 14 with his brother-in-law Ben aka Mo Cheez as his Executive Producer. Kevin’s relationship with Ben was like the big brother that he never had. Kevin forged professional music relationships with local and national producers and artists. Kevin spent many long days and nights in the studio making music with legendary producers. Kevin was not a fan of features but never missed an opportunity to make great music and build a relationship. Kevin never worried about his verse order on a track or whether another artist would outshine him. Kevin never hesitated to lay his versed on a track first. Kevin’s extensive vocabulary and use of metaphors made him a master of word play. Nothing came second to music for Kevin except for family.

Kevin was elated to learn that he and Shanika were going to become parents when he was 17. At the age of 18 Kevin welcomed his only child, a daughter Serenity into the world on April 12, 2004. Kevin was a proud and dedicated father who dreamed of giving his daughter everything the world had to offer and beyond. Kevin doted on his baby girl and showered her with attention, love, and lots of affection. Serenity was the most important person in Kevin’s life.

Kevin thrived academically and socially in school at Warford Elementary, Smith-Hale Jr. High, and later at Northeast and Alta Vista. Kevin’s preference for learning was his lived experiences. Kevin loved to eat and wherever a family meal was being served you could expect Kevin to be amongst the first in line. Some of Kevin’s favorite meals were his mom’s homemade jerk chicken with pineapple rice, his sister’s oven fried chicken, fried potatoes, and onions with a plate sized pancakes from Mrs. T’s, Wendy’s Dave’s Triple, and almost everything fried from Texas Tom’s (except for pork).

Kevin was a dedicated son, grandson, brother, uncle, cousin, friend, and most of all father to Serenity. Kevin held his family relationships, friendships, and love of God with the highest regard. Kevin was always there to support his family and friends when they were in need.

Kevin loved his mother dearly, and through the last years of his life she remained dedicated to his care.