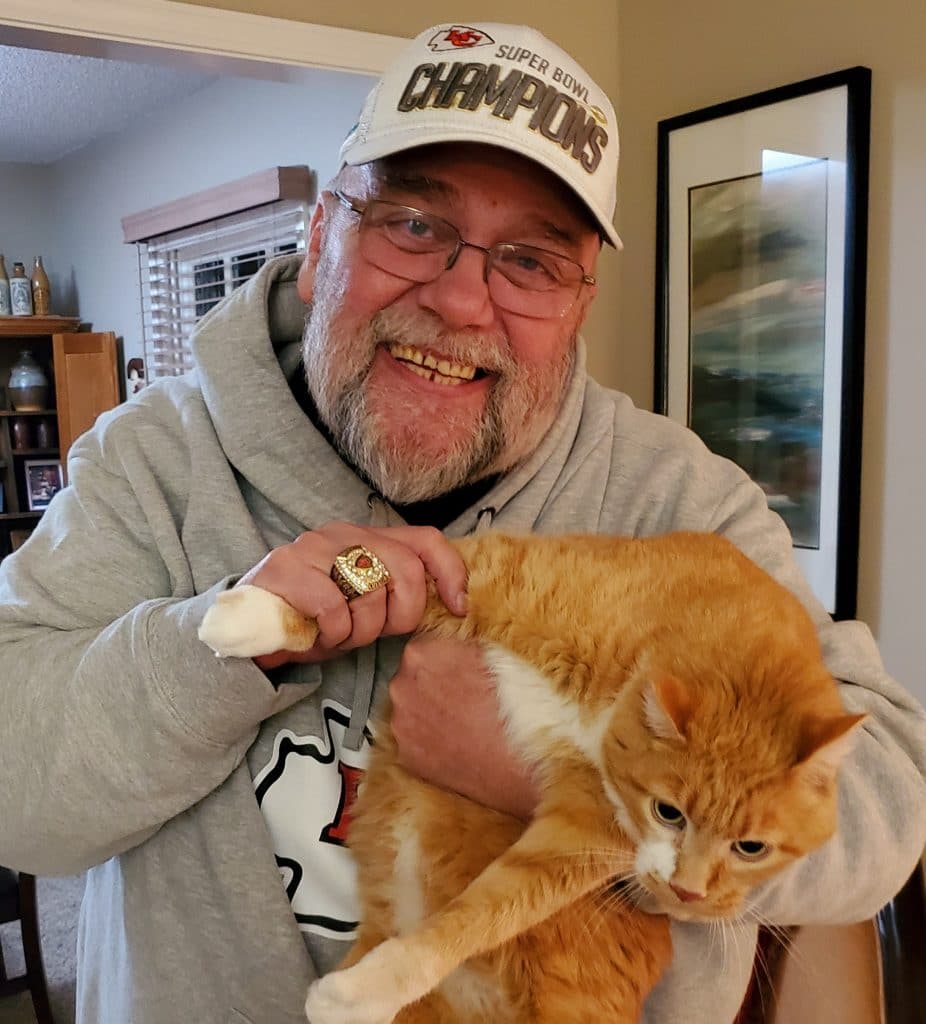 Larry “Big Dog” Johnson, 68, of Lenexa, KS passed away on January 9, 2022 at Olathe Health Hospice House.
Larry (Lawrence Arthur), was born in Kanas City, MO on August 4, 1953, the oldest child of Howard and Joan Johnson. He attended Shawnee Mission Northwest and The University of Kansas, home to his beloved Jayhawks. His passion for all things KU never waned. Rock Chalk!
A lifetime career in sales was built upon strong integrity, humor, charm, and a genuine interest in people. He maintained those qualities in all aspects of his life.
Larry loved the English language. Not only was he blessed with the “Gift of Gab”, but was also a voracious reader and writer, publishing two books. Though brain cancer and numerous treatments sent him on a different journey, he never stopped his drive or positive outlook on life. He found comaraderie everywhere, with lifelong friends, the crew at water aerobics and weekly card games with three generations of his family.
A proud Kansas Citian, he loved his city and his teams. He attended the inaugural game in 1973 Royals Stadium, even receiving a visit from Slugger as a 50th birthday surprise from his children at his home. He loved being part of the Kansas City Chiefs Kingdom, both real time and in fantasy football leagues. As part of a KU family, KU Basketball was a love he shared with his father, as well as his son, watching games in tandem in Maui.
Larry looked for every way to bond with his three children, his greatest joy.His Constantly learning and questioning, he enjoyed new technologies in all types of media. We all share his love of classic comedy, musicals, and movies. There are simply no words to express how much he loved us, how much we felt it, and how much we loved him in return.
Larry is survived by son Chris Johnson, daughter Kelly Doyle (Jeff), and son Tony Johnson. He is also survived by his father Howard Johnson and wife Jodi, sister Jackie Bay (Kenny)and sister Susi Hann (Nathan). He was preceded in death by his mother Joan Johnson.
A small internment ceremony will be held at Mt. Moriah on Monday January 24,, 2022 at 3:00 with a visitation at Shawnee Church of the Nazarene afterwards.
A Celebration of Life will be announced at a later date. In lieu of flowers, the family asks that donations be made in Larry Johnson’s memory to Olathe Health Hospice House.