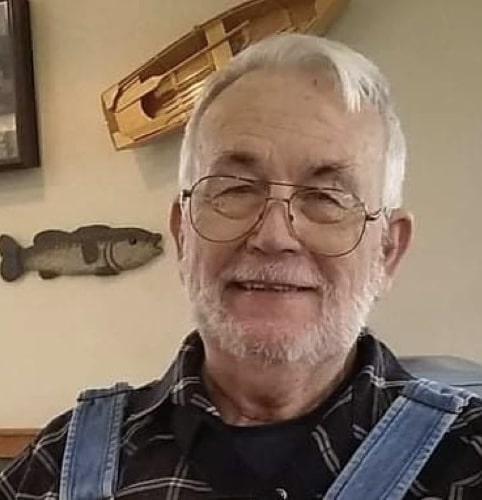 Lewis F Yokum Jr, 82, of Kansas City passed away Sunday, August 15 2021 at N. Kansas City hospital.
Lew, often known as Jr., was born January 23 1939 to Lewis Sr and Dorothy Dollins Yokum. He was welcomed by his parents and two sisters, Bonnie and Sue. Soon followed two brothers and a sister, Jimmy, Vikki and Doug and so began the beautiful bond they share, Lew always with unwavering support for his siblings.
Lew was a mechanic by trade and enjoyed his time working in various places in the KC area including Triangle National Lease. He welcomed three sons- Ed, Larry and Lewie to whom he enjoyed teaching about cars and mechanics. He instilled a work ethic as well as an ornery sense of humor as he raised them. On June 15 1993 he married Marilyn Belcher and welcomed a four year old little girl, Erin, as his own. In 1994 the three made a permanent home in Ivy Bend, Lew building the beautiful home from the ground up and always with Marilyn’s vision in mind. There he worked for Ditzfield and the Stover school as a bus driver off and on as he went in and out of retirement. Lew was never one to sit still. Always coming up with new projects and tinkering in his garage.
Lew will be remembered for his ornery ways, his big laugh, tough exterior and absolutely beautiful heart. He was a hero to the women in his life and an unwavering partner to the men. He made friends anywhere he went. To know him was, truly, to love him.
Lewis is preceded in death by his parents, two siblings- Bonnie and Jimmy- two sons-Eddie and Larry -and a niece Christy.
He will be lovingly remembered and forever missed by his wife Marilyn of the home, daughter -Erin, son -Lewie, brother- Doug, sisters -Sue and Vikki, four grandkids Cheyenne, Alexander, Maddox and Autumn, seven nieces and nephews, many cousins, countless friends and his faithful pup Rusty.
No arrangements have been made at this time but please consider memorial contributions to the Parkinson’s Foundation.