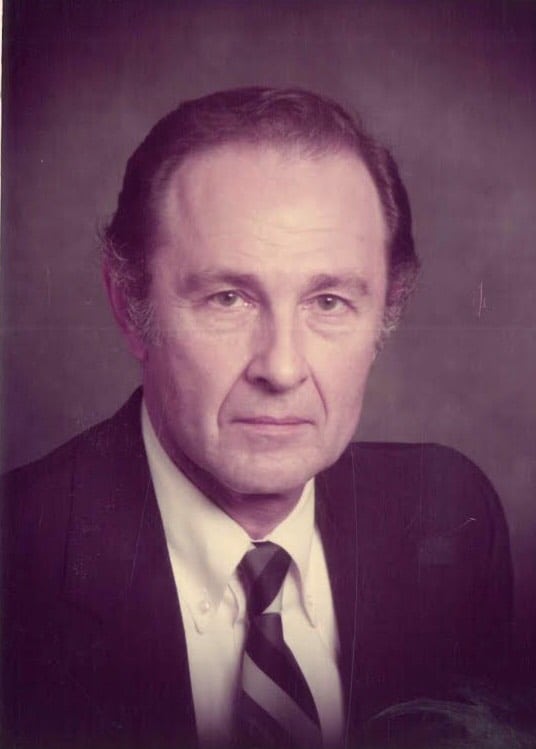 Lynne “Sandy” Sackett Cowles passed away peacefully April 9, 2021, at his daughter’s home in Raytown, MO, surrounded by his family.

Born November 17, 1926 at the old St. Joseph’s Hospital in Kansas City, MO, to Halie Sackett Cowles and Lucius Lynne Cowles, he grew up in Kansas City and graduated from Westport High School in 1943. He attended Kansas City Junior College until he joined the Navy.

A WWII veteran, he served in the Philippines as a Pharmacist Mate Third Class on the PGM-28. When he returned to Kansas City, he married Barbara Parker, and they had one son, Jonathan Lynne Cowles, who passed away in 1954.

Lynne began his career in banking, married Bunnie Dwinnell, and together they raised two daughters. As active members of St. George’s Episcopal Church, they made many friends. Sandy was also active in the American Legion with his dad, Lynne.

After Sandy retiring and losing his wife Bunnie to kidney disease, he re-married Barbara Parker (Ballew). They enjoyed a few happy years together and Barbara was, as she said, very happy that her Sandy had come back. He married Marje Cassidy in 1989, and they spent their winters together in Leisure World, Arizona, where he eventually met and married Shirley Woolf. Shirley and Sandy were a perfect match, and they danced their way into each other’s hearts. They spent 21 wonderful years dancing, visiting with friends and family, and enjoying each other’s company.

His sense of humor, jokes and “have I ever told you the one about . . .?” will be in our hearts forever.

We will forever be grateful for the amazing care given by Crossroads Hospice of Kansas City.

Rest well, Daddy. We love you!