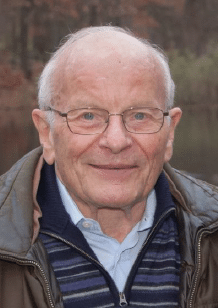 Marvin L. Rogers, retired professor of political science and indefatigable world traveler, died from natural causes at age 88, on Wednesday, April 21, 2021, at home, in Columbia, Missouri, surrounded by his family.

In Marvin’s words, his life was shaped by three passions: parenting, teaching, and trying to help others. He was born on October 25, 1932, in San Pedro, California, to Gordon and Blanche (Street) Rogers. His father was an engineer trained at MIT and his mother a graduate of Wellesley College in Massachusetts. When he was 12 years old, Marvin moved with his parents and younger sister Helen to Berkeley, California for his father’s work. As a child, Marvin and his family often went camping, instilling in him a lifelong love of the outdoors. Marvin was active in the Boy Scouts, achieving the then exceedingly rare rank of Eagle Scout. As a boy he became fascinated with world affairs through following the news of the Second World War, a fascination that would shape his life and career.

In 1955, Marvin graduated with a BA in Oriental Affairs from Pomona College, where he had enlisted in the college’s Army ROTC program. Two years later, he received a Masters in International Relations from the University of California at Berkeley, then joined the Army to fulfill his ROTC obligations. That same year, 1957, he was commissioned as an intelligence officer and assigned to a psychological warfare unit, first in Honolulu and later in Okinawa in southern Japan. He was honorably discharged in Okinawa in 1960, then traveled throughout South East Asia for three months before returning to the States to begin a PhD program in political science at UC Berkeley.

In 1965, Marvin and his then-wife Susan Spencer Smith moved to rural Malaysia for two years to do research for his PhD dissertation, investigating Malay politics at the local level.

Marvin received his doctorate in 1968. He began full-time teaching in 1967, first at Rutgers University in New Jersey, and then at California State University at Northridge. A year later he began teaching at the University of Missouri, Columbia, where he taught until 1997. During his almost 40 years at MU, he taught large introduction to political science classes, courses on comparative politics, and courses for the Honors College on the Vietnam and Iraq Wars. Marvin often arranged for veterans to talk to students about their combat experiences and how they shaped their lives. He served as Director of Undergraduate Studies in Political Science for ten years. In 1979, he resurrected the inactive Peace Studies program on the MU campus with the support of local businessman Charles Atkins. The program is active on the campus today. In 1981, Marvin received a Fulbright Scholarship, which he spent in Indonesia with his two young sons, studying Indonesian language and politics.

Deeply committed to helping his students grow, Marvin mentored through the university’s intensive writing program and was an ardent advocate for its study abroad programs. In 1985, his colleagues nominated him for the University’s Excellence in Teaching Award.

In 1991, while on sabbatical in Indonesia, Marvin spent several weeks in Malaysia where he met Dr. Sharmini Visvanathan. The two of them were married later that year.

In 1994, Marvin was a visiting scholar at the National University of Malaysia. In 1995, his book Patterns of Change in Rural Malaysia, a culmination of 25 years of research, was published in the United States. A year later it was published in Malaysia.

A few years after his official retirement from MU in 1997, Marvin resumed teaching freshmen at the Honor’s College about the Vietnam and Iraq Wars. In the final decade of his life, he worked for Mobility Worldwide building wheelchairs for rural villagers around the world who were unable to use their legs. In Marvin’s words, he found the program very meaningful: “knowing that each wheelchair enabled a person to gain mobility, respect, and opportunities.”

At the very end of his life, Marvin expressed his gratitude for “a life full of an amazing range of experiences, for being able to help students grow, and to have helped raise three remarkable children.” He is survived by his sister, Helen Delfanti; his wife, Sharmini V. Rogers; his three children, John, David, and Dahnya Rogers; two daughters-in-law, Rebecca Ashley and Karen Vrotsos; and two grandsons, George Vrotsos-Rogers and Henry Rogers.

A celebration of life is planned for later in the summer. Those wanting to participate, please let Dahnya Rogers know at dahnya@me.com.