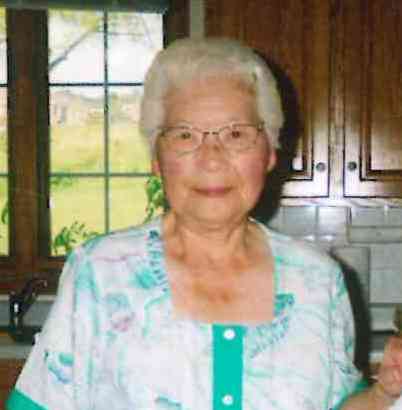 Matsue LeBeau, aged 93 years and 7 months, known to her close family as Lily, passed away June 1, 2020 peacefully in her sleep, at her home in Shawnee, Kansas.

There will be a funeral mass held for Matsue on June 9,2020 at St. Joseph Catholic Church in Shawnee, Kansas.  Due to the guidance on gatherings during the COVID-19 pandemic, the family will hold a celebration of her life at a later date once the current restrictions are lifted.

In lieu of flowers, memorial donations can be made to Catholic Community Hospice in her name.

Matsue Fujita was born on October 25, 1926 in Sapporo, on the island of Hokkaido Japan. She finished her schooling there and worked in a large department store called Marui Imai for several years and by a chance meeting, she met her future husband Ambrose LeBeau, who was with the Army in the 31st Infantry Regiment. They were married there and as he was getting out of the military soon, by herself she set sail on a large boat that took her to the United States to the state of Washington. He was to meet up with her there. What courage to go to a different country not speaking the language.

They settled in St. James, Missouri where they raised a family and together built a life and a successful farming occupation.  She was the right hand to his left, and he always said, he could not have been as successful if it were not for her. They were both hard workers and focused on the goal of raising a family and being successful. She was also a wonderful gardener and fed her family on excellent produce that she canned, she loved to garden and grow beautiful flowers and did it well. She also enjoyed sewing and quilting and knitting, and as everything else she did it beautifully.

They had a very successful Dairy route for twenty years, and as the residents of St. James can attest, the milk was delicious.  They then made the transition to raising and selling beef cattle, and discovered in the 80’s, that there are ups and downs to farming. Through hard work, they finally came out on top.

After their children were grown and gone, they both made the decision to look and think ahead and sell the farm and move to Jefferson City in 2001. They did not want the farm to be a burden on the children or if something happened to either one of them.

They built their dream home there and settled in Wardsville, Missouri for approximately ten years. Matsue lost her husband Ambrose in January 2012, and continued to live on her own in their home. In 2016 she moved to Shawnee, Kansas to live with her daughter and son-in-law where she was comfortable and loved that she had no worries and family could come and visit and keep in touch with her at any time and they did. Every morning she would walk around the subdivision, and enjoyed that exercise. Everyone who met Matsue, remarked that she was the most sweet and gentle lady.

Matsue is survived by her sisters-in-law, Sr. Mary Venard of Helsinki Finland and Diane LeBeau of St. Louis, Missouri, also her brother-in-law Paul LeBeau in Orlando and his wife Verna, and Paul’s children. They were so good to her when she came to the states, and she was much beloved by them.

Other survivors include her son Richard LeBeau, daughters Lily LeBeau and husband John Lyn Turner as well as Veronica LeBeau and husband Mulugeta Asfaw. Grandchildren are Sky Matthews, Christina Rogers and husband Andy, Kylie Dickneite and husband Jason, Darrell LeBeau and Mia Filla, Tebereh Mulugeta, Joseph Mulugeta and wife Lexie DiGiovanni and Victoria Mulugeta.  Great grandchildren are Hailey Matthews, Mallory and Mitchell Rogers and Elise and Camille Ann Dickneite and Hadley LeBeau. There are also a host of nieces and nephews too numerous to mention who adored their Aunt Lily.

Funeral arrangements are under the direction of Heartland Cremation and Burial Society of Overland Park, Kansas.