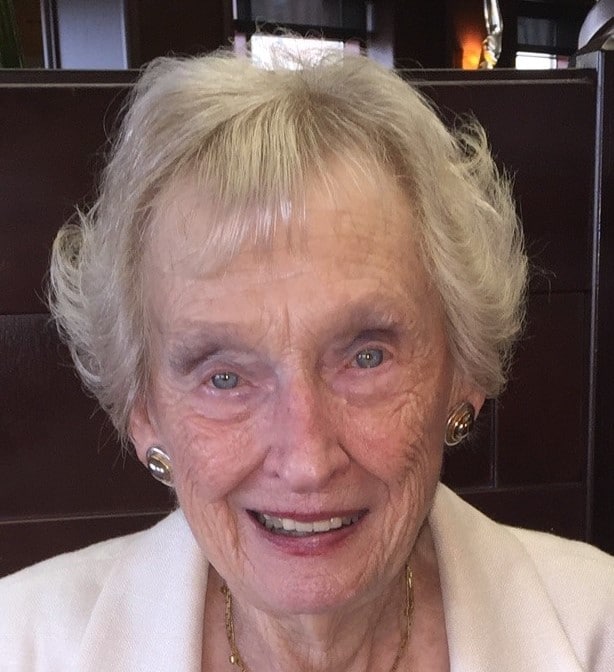 Patricia Hope (Johnson) Cross born August 8,1925 in Butler, Missouri passed into the arms of her Lord and Savior on Friday, May 31, 2019 at the age of 93. A visitation will be 6:00 to 7:30 PM Friday, June 7 at Heartland Cremation and Burial Society, 6113 Blue Ridge Blvd., Raytown, Missouri. A Celebration of Life Service will be 10:00  AM Saturday, June 8 at Raytown Christian Church followed by a burial service at Oakhill Cemetery, Butler, Missouri.

Pat was born in Butler, Missouri as the eldest of two daughters to Lester and Faye Johnson. Pat and her beloved Dale married on October 30,1948 and celebrated 66 years of marriage at the time of Dale’s passing in 2014. After their marriage, they moved to Kansas City and later to Raytown where they raised their two children, Connie and Kirk. Pat started her working career at Butler Monument Company and then worked for Trans World Airlines and for Bendix Aviation. She then became a stay at home mom for several years and later became the Owner/Manager of The Cross Patch, the first Hallmark Card Shop in Raytown.

During Pat’s time as a stay at home mom she volunteered as a Camp Fire leader and Cub Pack leader and also volunteered at the district level with both Camp Fire Girls and Boy Scouts of America. She was very involved with leadership training in both organizations and worked hand and hand with Dale on many committee’s for several years. Pat and Dale have been long time members of Raytown Christian Church and they were actively involved in many ministries of the church along with their membership in the Adam and Eve Sunday School Class, which recently celebrated their 70 year Anniversary.

Pat took on many leadership roles throughout her lifetime. She was a natural born leader and very much a person that got involved in helping in whatever way she could. Her later in life works of service included the management of the Food Pantry at church which she served in faithfully for six years. Another big part of Pat’s life was her passion for genealogy. She spent hours researching and corresponding with people to learn and document the family history.  Pat had a serious side but also had a fun loving and creative side. She had a love for music and she shared her love through her piano and organ playing. She and Dale discovered a mutual love for both square dancing and round dancing and they had great fun doing this together and making lots of fun memories and many friends along the way. Camping and RV’ing was a big thing for them and they had great fun travelling. As much as she was involved in all of these things, her love for God and for family and friends was more important to her than anything else. Pat loved and cared for her husband Dale for many years as his health failed. She loved and enjoyed her children and their spouses and always looked forward to any family activities and spending vacation time with them.

Pat and Dale had two grandchildren that they adored and they were very proud of both Michael and Kayla and great grandson Eli. After Dale’s passing, Pat’s time was devoted to the neighbor’s she had at Elliott Place. She enjoyed her neighbors who became like family and she served those who needed extra love and attention. Pat lived a full and vibrant life. One friend called her “spicy”! She was a go-getter and if you met her, you never forgot her! Her personality was big and she was kind hearted and loved well. We will miss you dear Pat! Pat is survived by daughter Connie Cooper and her husband Chuck and their two children, Michael and Kayla,and great grandson Eli; and son Kirk Cross and his wife Nancy.

Memorial contributions are suggested to Harvesters or City Union Mission.