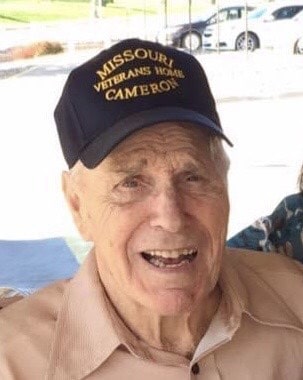 He was the son of Orville and Anna Belle (Hawkins) Bosler and born February 26, 1925 in Ludlow, Missouri. Paul was married to Earline (Spencer) from 1947 until her death in 1967. He was married to Maxine (Pickett) from 1967 until her death in 2012. Paul was a member of The Mooresville Christian Church. He was a longtime resident of Mooresville where he was a brick layer and a cattle farmer.

Paul was a Veteran of World War II where he served with the Cannon Co 274th Infantry as a Tech Sergeant. He was a Gun Crewman Light Artillery 844 where he earned many medals including the American Theater Ribbon and the European-African-Middle Eastern Ribbon with 2 Bronze Stars.

He was preceded in death by his parents, two wives, brothers; Claude and Marvin, and sisters; Edna Ruth and Evelyn.

In lieu of flowers, donations may be made to the Mooresville Christian Church or Utica Cemetery. The address is: Paul Bosler Memorials, 15986 Liv 413, Mooresville, MO 64664