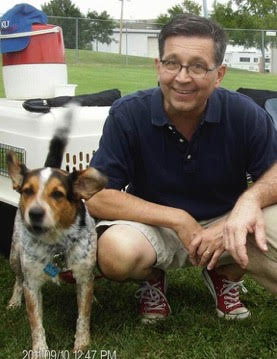 Randy Gilbert Velasquez, 66, Kansas City, Missouri, passed away August 7, 2020 at KC Hospice House after 3 years of what he referred to as the “cancer game”.  Never really one to do battle, he chose to approach the cancer like he would a chess game – his move, it’s move”.
Randy, the oldest of five children, was born April 13, 1954 in Kansas City, Missouri to Bill and Phyllis Velasquez.  After graduating from Northeast High School in Kansas City, Randy worked at the Alameda Plaza before going to work at the Kansas City Star in 1986 in the composing department.  During his 22 year tenure at The Star, he worked in several different positions in the Advertising Services Department including Graphic Ad Designer and Team Lead at The Star’s Johnson County Bureau. When The Star reorganized in 2008, Randy embraced the change and used it as an opportunity to do something new.  Soon after leaving the newspaper he accepted a position at Brookside Barkery and Bath while continuing as a freelance Graphic Artist creating the Grass Pad ads.  Randy was a natural working at the Barkery and quickly took to dog bathing and helping customers make the right choices for their pets.  While at the Barkery his kindness and love for animals was clear in everything he did.  He came to know the customers and their pets personally and developed many friendships across the city.
In 1998, Randy joined a new church start in Olathe, KS named Saint Andrew Christian Church, (Disciples of Christ).  Typical for him, he jumped in feet first and soon became the church treasurer.  As a new church without a building, there was always plenty to do including setting up the worship space in a school gym on Sunday mornings and Randy was always on top of it.
Randy loved to listen to most kinds of music, including Opera and enjoyed catching one of his favorite pod casts when he could. He also loved sitting down with a good book and had perfected his ability to just be with you, even if it was just sitting quietly in the sun room, having a morning cup of coffee.  If it was a Sunday afternoon and there were  games on, he would manage to have all the tv’s on, each with a different game.  He loved to travel and take others to see the sights he had seen. Enchanted by the gardens and Châteaus, France was his favorite place to go.   At home he was on top of social justice issues and always willing to help someone in need.  Occasionally he would refer to himself as a curmudgeon even though there was plenty of evidence to the contrary.  Through the years one of his greatest passions became rescuing animals.  Thanks to one beagle-basset named Copper that came bouncing out the door of the shelter and jumped into his car, he was hooked.  Randy was usually a behind the scenes advocate, helper and caregiver; willing to do everything he could to save and care for pets.  Regardless of the number of times his heart broke over the loss of one, he was convinced that the gift they were was worth it.
Randy was preceded in death by his youngest sister Andrea Velasquez, paternal grandparents Francisco and Felicitas Velasquez, and maternal grandparents Raymond and Elva Smith.  He is survived by his Spouse of 21 years, Gary Duncan; Father and Mother Bill and Phyllis Velasquez;  Sisters Pam (Mark) Hawkins and Lisa (Mark) Palomares;  Brother Phil Velasquez; Mother-in-law Barbara Duncan; Sister-in-laws Janet Ridpath, Teresa Ferbet (Mark), and Denise Duncan; Brother-in-law Wayne Duncan; Nieces Danielle Hawkins, Sarah (Andy) White and Amanda (Jason) Boyer; Nephews Nicholas Palomares, Tanner and Heath (Haley) Velasquez, Zachary and Tyler Powell, Eric Sollars (Jessica), and Caleb Ridpath;  Great-Nieces Zoe Velasquez, Rebecca and Jessica White;  Great-Nephew Tucker Boyer and his furry, four legged kids at home.
Due to the COVID19 suggested guidelines for safety, a private memorial service will be held for the immediate family Sunday, August 30, 2020.  A celebration of life and sharing with friends and extended family will be held at a later date.   In lieu of flowers, donations can be made in Randy’s memory to the Colon Cancer Coalition – (http://coloncancercoalition.org/donate/ ), The Pet Connection – (http://www.thepetconnection.net/), or Beagles and More Rescue – (http://www.beaglesandmore.info/).