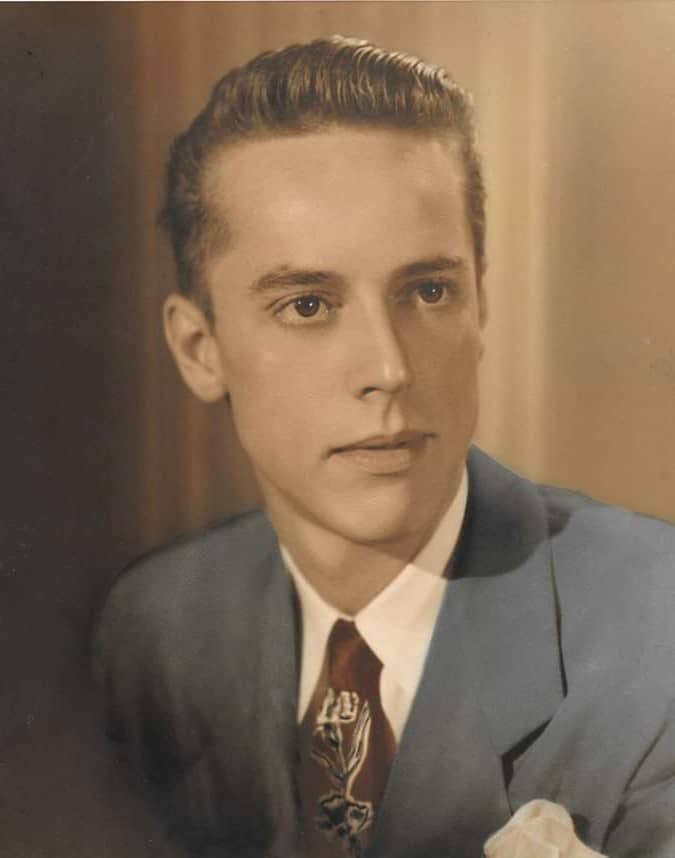 Richard Brown Booth of Independence, MO died quietly on January 28, 2020 surrounded by family.  Duke, as he was known in his later years, was born June 27, 1926 in Syracuse, New York and preceded in death by his parents, Howard Saunders Booth and Ethel (Brown) Booth; and his wife of 53 years, Ronna Lee Booth in 2019; his brother and sister-in-law, Howard S. Booth, Jr. and wife Mildred Jane Booth.  He is survived by his children, Scott Booth and wife Jeannie; Allison Beall and husband Greg; Shannon Rice; Gregory Booth and wife Michelle; along with ten grandchildren and seven great-grandchildren.  He is also survived by Howard and Mildred’s children, Donna Kennison and husband, Mark; Howard Booth and wife, Dana; Richard Booth and wife, Nancy; along with twelve grand nieces and nephews.

Duke was a corporal in the Army Air Corps and served during World War II. After his discharge, he studied aeronautical engineering and earned his bachelor’s degree from Northrop University and a business certificate from UCLA.  After working for McDonnell Douglas Astronautics Company in Huntington Beach, CA for 25 years, most notably on Mercury, Space Station and Space Shuttle projects, he retired in 1985.

Duke was an avid sportsman, njoying golf, bowling and shooting.  He competed in many tournaments and has the hardware to prove his successes.  He even started a shooting club at McDonnell Douglas. Having enjoyed good health most of his life, he was able to water ski into his 70’s, play golf into his 80’s, and didn’t retire from league bowling until his 90’s.

Duke served as an ordained minister for 36 years in Community of Christ congregations he attended in Long Beach, CA and then at Mission Woods in Blue Springs, MO, serving as Financial Officer in both congregations.  He thoroughly enjoyed building and remodeling projects and was a member of the church building committee. He was a licensed ham radio operator (KA6DSY) and participated in his community’s emergency communications program.  He also enjoyed working at the polls every election his health would allow, and he worked for the U.S. Census a few times. Duke and Roni loved to travel and organized many wonderful family vacations. When not on the road, they opened their home to host family and friends or whoever needed a roof over their head for a while, so much so that their home became known as Booth Bay Inn.

A Memorial Service will be held at 3:00 PM, Sunday, February 23, 2020 at Mission Woods Community of Christ located at 2800 NW Duncan Road, Blue Springs, MO 64015. In lieu of flowers, please support the National Foundation for Cancer Research in Rockville, MD or Outreach International in Kansas City, MO.