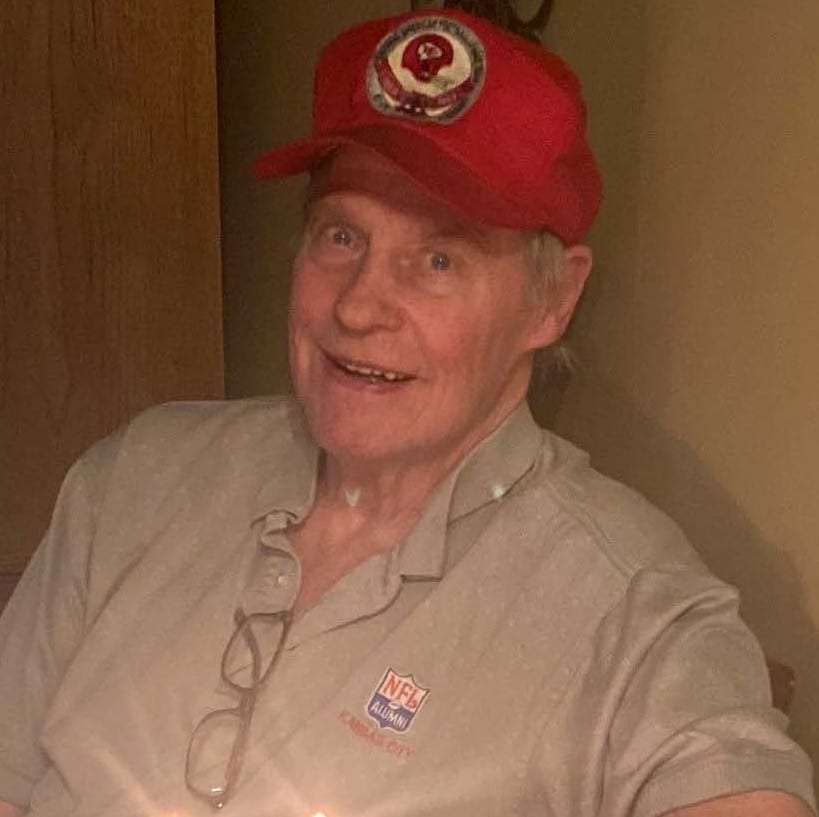 Robert Vernon Ply of Raytown, Missouri, age 81, and known to most as “Bobby” went home to be with his Lord and the Love of his life Peggy Ply on May 18, 2022.

Bobby was born August 13, 1940 in McAllen Texas and raised in Mission, Texas. At Mission High School he grew into a well-rounded and gifted athlete lettering in track, basketball, baseball, and football. After graduating from High School in 1958, Bobby earned a Football Scholarship to attend Baylor University in Waco, TX. In 1962, after four years of hard work, he graduated with a Bachelor’s Degree in Business Administration.

During his time at Baylor, Bobby would experience many milestones. One being his greatest blessing, his family. After knowing each other since the fourth grade Bobby married Peggy Pearson on June 4, 1960. They welcomed their only child, Laura Leigh on May 1, 1962.
In 1962, while at Baylor, he was drafted to play football for the Dallas Texans. A year later, the team would be moved to Kansas City thus beginning Bobby’s lifelong involvement with the Kansas City Chief’s organization. He played Defensive Back / Safety from 1962-1967; becoming a two-time AFL Champion and a record holder for the most passes intercepted in a single game.

Bobby and Peggy settled in Raytown and lived in the same home for 55 years. After football, he spent another four decades working in the community. First, with United Computing Systems as Comptroller. He then worked 20 plus years with Central States Thermo-King, retiring in 2007 as their Executive Vice-President and Chief Financial Officer.

Bobby was an active member of The NFL Alumni and one of the original founding members of the Kansas City Chief’s Ambassador Group.
Bobby would want to be remembered for, his love for traveling, socializing with close friends and love for the game of football. Most importantly, he’d want to be remembered as a loving husband, father, “papa” and “great-papa”

While Bobby and Peggy are celebrating their 62nd wedding anniversary in heaven, we will gather in person to celebrate his life June 04, 2022, at Heartland Cremation and Burial Society, 6113 Blue Ridge Blvd, Raytown, MO 64133. Visitation from 1:00 p.m. to 3:00 p.m. and a memorial service from 3:00 p.m. to 4:00 p.m. To watch the live stream of memorial service, click here: ROBERT VERNON PLY MEMORIAL SERVICE.

In Lieu of flowers, we ask that a donation be made in memory of Bobby to: The Ambassadors Charitable Foundation, One Arrowhead Dr., Kansas City, MO 64129.