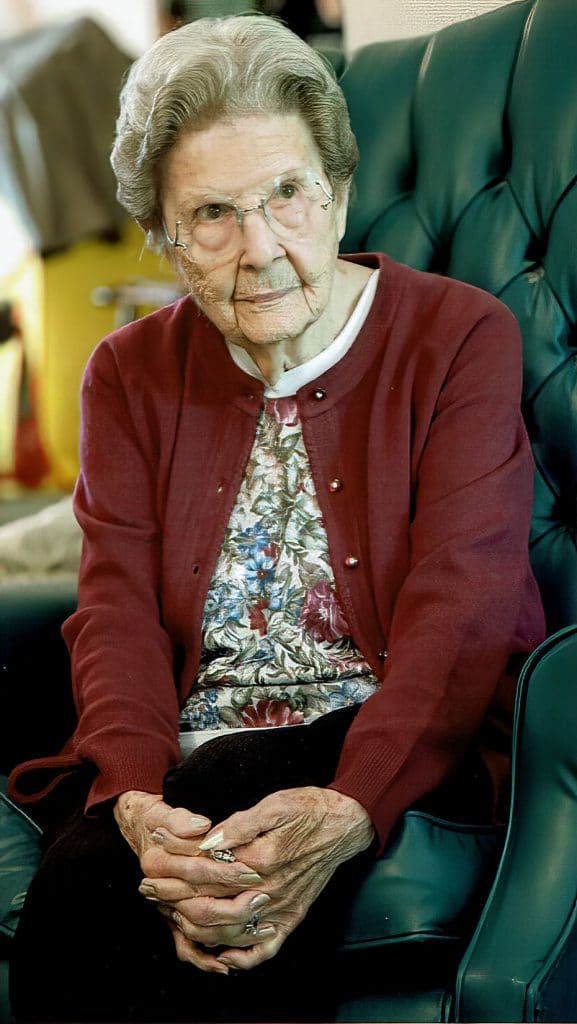 Ruth J. Hermance, a sweet and loving woman, left a huge void on earth when she crossed over the ridge to join her lost loved ones on May 18, 2021. She was 98 years old when she passed comfortably of natural causes with her daughter, Lee Ann Stamm, and son-in-law, Tim Stamm by her side in their/her home.  Besides them, she leaves behind her son, Randy Hermance, and daughter-in-law, Ellen; four grandchildren and spouses, Kelly Kerns and wife Laura Kerns, Tracy Kerns and wife Sandi Ault, Kyle Hermance, and Tyler Hermance; three great grandchildren and spouses, Tim Kerns, Katie Brinkmeyer and husband Ben Brinkmeyer, Dimi Neria and husband Scott Johnson.  (Of note she will be seeing her deceased great granddaughter, Emily Kerns and her great great grandson, Connor Johnson and, of course, her beloved husband, Neil.)  She dearly loved all her family and the gatherings throughout the years in which she served as matriarch of the family.

Ruth started her life journey on December 4, 1922 when she was born to Adeline and Richard Bannasch in Detroit, Michigan.  She was an only child and desperately wanted to have another sibling, but instead she received all the loving attention from her parents.  Adeline was a superb seamstress and made all of Ruth’s cloths, but it was the special, bright red winter coat she made that Ruth proudly remembered all her life.  Being an avid Tomboy, Ruth loved Michigan winters when ice hockey was her sport of choice.  She played right along with all the boys, who considered her one of the gang.

Her father, Richard, was a Detroit City fireman who adored his daughter.  He would call home anytime he had an interesting call so that her Mom could bundle her up to chase the firetrucks to their destination.  She could never do this in today’s society, but it was one of her fondest childhood memories.

The Great Depression started in 1929 after the stock market crashed and many families suffered without food, money or jobs.  Fortunately, Richard was a fireman which was a secure and necessary job and kept her family safe.  Her parents reached out to several other families including Ruth’s cousin Johnny.  This helped both of them by giving Ruth the companionship she desired and kept Johnny fed and secure.  Until his death, Johnny would call every year to talk to Ruth and always mentioned how grateful he was to her family.

In 1938, at the age of 16, she attended Circle Pines Center camp in Delton, Michigan.  This camp was unusual for the time as they welcomed everyone of any color, sexual orientation, mixed marriages, and all religious groups.  The Center became a valuable influence on Ruth’s life-long liberal beliefs and love of all mankind.  It also was where she met the love of her life, Neil Hermance.  He was the dashing, young lifeguard for the lake swimmers.  The camp girls flocked around him even though he was engaged, all except Ruth.  Her values didn’t allow her to chase an engaged man, which, of course, sparked his interest.

The following year Ruth returned as a camp counsellor, and Neil returned as a single man with a broken engagement.  They became an item of the camp all summer and soon were the couple to watch on the dance floor.  They danced in perfect harmony, fell in love, and the fluid easy movements on the dance floor became a theme for their lifetime together.

After camp, Neil continued to see Ruth and courted her on a sailboat and with picnics at Belle Isle, an island park in Detroit, Michigan in the Detroit River.  (Side note – In 2008, they renewed their Michigan memories by visiting Belle Isle, Ruth’s childhood home, and her father’s Fire Station #32.)

Doubting that Adeline would give her blessing for her 18-year-old child to marry, they eloped on December 26, 1940 and were married by a Justice of the Peace.  When they arrived back home to confess, Richard told his daughter that now she had her own life and could do anything she wanted.  Thus, began their fairytale life together.

They both became Specialists in Creative Recreation for the Youth Department of the Consumers Cooperative Association for a seven-state area.  This involved entertaining youth and teaching them fun games they could make and play; they also taught songs and crafts.  A favorite was when Ruth and Neil held puppet shows with their own handmade puppets.  Each summer, they took the show on the road to perform at County Fairs throughout the seven-state area.  Their most popular show was Punch and Judy, which would be so politically incorrect today.  Their specialty, of course, was teaching folk and square dancing.

When the country went to war, Neil served in the Navy from 1943-1945.  During this 2-year absence, she was a real-life “Ruthie the Riveter.”  It was the only time they were physically apart in their married life, and both considered it the hardest time of their lives.  After the war, they were both told that they would never have children.  So they returned to the Cooperative job to travel and work with youth.

In October 1948 Ruth discovered she was pregnant, and a girl, Lee Ann, was born to them in 1949.  Neil would not travel without Ruth so they settled down in the Gladstone, Missouri.  In September 1951 a second child, Randy, was born to them.  Ruth loved being a mother and homemaker.  She took up the hobby of ceramics and soon was so proficient she became a teacher.  Her made-by-hand pieces and glaze work were prize-winning.

Ruth and Neil had two primary sets of life-time friends – the ceramic ladies and their husbands and the square dance couples they taught to dance.  In the end, Ruth outlived all but one, Sylvia, who is now 102.  She often said you have to be strong to live a long life.  There is so much difficult loss.

In 1958, the family moved to Lee’s Summit, Missouri.  To keep busy and to supplement income at different times, Ruth baked healthy cookies for the Lee’s Summit Montessori school and sold Tupperware and Avon.  Ruth served on the PTA for Randy and helped Lee Ann’s girl scout troop earn badges in crafts, dance, and camping.

Heading into the kid’s teenage years, Ruth and Neil started a teen club for the Village Fair neighborhood.  They provided activities for the local teens and taught square and folk dancing for no charge.  Then they rented the clubhouse or invited all the teens to their home for chaperoned parties.  When a swim club was started in the neighborhood, Neil helped teach Randy and Lee Ann diving and swimming and was a judge and the pool clown, while Ruth worked on the annual Water Festival programs and transporting swimmers to and from swim meets.  They were always the loving couple who did whatever was necessary to keep all of the kids out of trouble and happy.

Shortly after the kids moved away, Neil was laid off and had triple-bypass surgery.  Deciding life was too short, they sold their home and began travelling in a fifth wheel for 22 years.  Most winters they set up their booth in Mission, Texas and sold beautiful Austrian lead crystal necklaces, bracelets, and earrings.  Ruth skillfully strung most of the long crystal necklaces, and loved doing it.  This provided their retirement income.

Neil and Ruth never met anyone they didn’t like.  If they spent several hours with a couple in an RV park or with a crystal customer or with other booth sellers, they would exchange addresses and become life-long friends.  The Christmas card list became huge but kept everyone in contact.

In 2004, they got off the road and built a beautiful sunroom onto their little home in Lee’s Summit.  It quickly displayed their new love of plants and began to look like a jungle with many exotic and ordinary plants.  The outdoors soon had several beautiful display gardens, too.  They just didn’t slow down.

Ruth began to notice early signs of Alzheimer’s Disease in Neil and in 2008 they moved to the country with Lee Ann and Tim for extra help.  During these years, they enjoyed dinner theater, wine tasters, reading, and watching the birds and wildlife.  In 2013 Ruth and Neil celebrated their 73rd anniversary.  Six months later Ruth said good-bye to the love of her life, who never forgot her in the fog of Alzheimer’s.

In 2017, Ruth was diagnosed with dementia.  Her daily joys became working jig saw puzzles, binging Netflix programs, watching the birds and squirrels at the feeder, and collecting and caring for succulents.  Just as she joined in activities with Lee Ann as a child, she started attending her Kansas City Pipe Circle activities and Moon Lodge ceremonies.  She started making many new friends.  Then she began to attend parties with another group of Tim and Lee Ann’s friends.  This was five special couples that her kids had associated with for 33 years.  It didn’t take long before she was adopted as “Mom.”  This group made her feel young as witnessed after one too many margaritas, she put her leg on the table at the restaurant to the delight of all there.  There was one other very special couple, Pat and Penny, who would come over to play cards and always included Ruth.  In fact, they would create a hand for Neil, and the guys played that hand.  So, all six of us were there.  That touched Mom’s heart so much.  Age and dementia did not stop her from making new friends.

In 2019, Lee Ann and Tim held a surprise birthday party for her at age 97.  She saw many old friends she hadn’t seen since 1982 when they set out in the fifth wheel.  She fluttered around the room like the ultimate social butterfly and was delighted.  She remembered everyone there and how they had added to her life.

When COVID hit in 2020, it was getting too hard for her to work puzzles or finish reading books, but she found great pleasure with the birds and her succulent plants.  She would spend hours looking at pictures of succulents in books and reading the subtitles.

Everyday she woke up saying “I love life and if I die soon tell everyone, I had a wonderful life and that I loved them.

We tell you now – She had a wonderful life and she loved you.