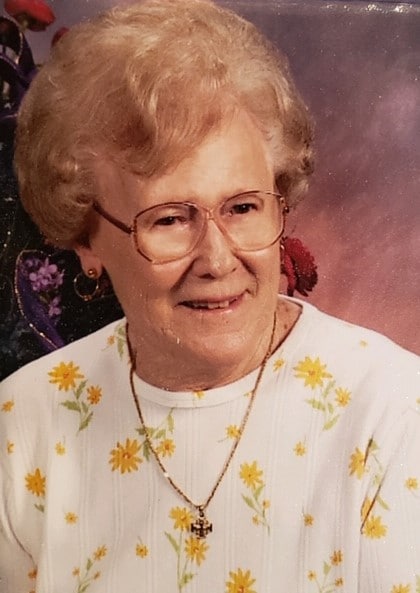 Ruth Marie (Meyers) Freeman passed away peacefully on November 1, 2020. Ruth was born on January 1, 1927 in Kansas City, Kansas to her parents Joseph and Ethele Meyers.

She married Oral Lynn Freeman in 1949, after Lynn graduated from Kansas State University. They were married for 46 years when Lynn passed away. Ruth and Lynn moved to Overland Park in 1957 where they raised their family with the love and help of God.

Ruth was a member of Beta Sigma Phi philanthropic sorority. Ruth volunteered with over 10,000 hours at Shawnee Mission Medical Center before accepting a paid position as Executive Secretary to the Volunteer Director.

She and Lynn enjoyed extensive traveling throughout the United States. Ruth was a loving mother to her two sons, grandchildren, neighbors and a friend to many. She was a dedicated K-State Wildcat fan.

Ruth was preceded in death by her husband, Lynn, and her parents. She is survived by her sons Gary Lynn (Carol) Freeman and David Wesley (Page) Freeman. Ruth had two grandchildren, Kelly Nicole Freeman and Calvin Patrick Freeman. A gravesideservice is scheduled at 1:00 pm on November 9, 2020 at Shawnee Mission Memory Gardens, 23215 W. 75th St., Shawnee, KS. In lieu of flowers, the family welcomes donations to the Kansas VFW.