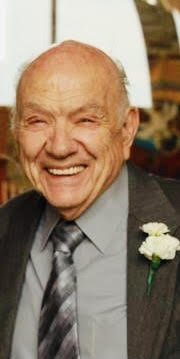 Wilfred Carl “Chick” Johnson, Independence, Missouri, passed peacefully February 19, 2021.Wilfred was born September 22, 1925 to Leonard Tory Fritz Johnson and Etta Mae Davis. He moved to Independence, Missouri with his older brother, Elvin, when he was eight years old. Growing up during the Great Depression, he learned about hard work at a young age by finding any kind of job to help out his family. He graduated from William Chrisman High School in 1943. He married Beverly June Wagner July 23, 1948, and together they had two children. They had 72 glorious years together. He became a machinist after high school and spent his last 35 years at TWA where he retired in 1990. He enjoyed tinkering around in his workshop where he taught many of his grandchildren how to fix almost anything. He enjoyed woodworking and built many items for his children and grandchildren including rocking horses, doll beds, marble game boards, Cub Scout Pinewood Derby cars, and many other items. He spent much time with his grandchildren whether it was helping them with building school projects, telling stories from his childhood, or participating in vacations to Branson, Disney World and Hawaii. Everyone knew they could count on him to give them a good laugh and keep them entertained. He was an amazing husband, father, grandpa, and great grandpa (aka “Papa Great”). He was loved by all and will be missed by many.