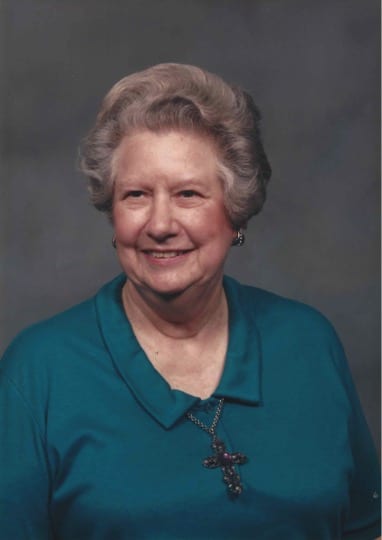 Mary Ruth (Rogers) Hyde, 96, passed away at South Hampton Place on March 17, 2018 due to a brief illness. A memorial service will be held at 11 a.m. on Saturday, June 2nd at Calvary Episcopal Church with Rev. Knute Jacobson and Rev. Beth Simpson officiating. A reception will follow.

Mary Ruth was born on August 9th, 1921 in Mountain Grove Missouri, the oldest child of Willie Ruth (Parker) Rogers, a school teacher, and Joseph Murray Rogers, a stone carver. Mary Ruth graduated from Mountain Grove High School in 1939. She attended Drury College (1940-42), the University of Missouri (1942-43), and the University of Tulsa (1943-45), from which she graduated with a Bachelor’s Degree. Her areas of concentration were astronomy and geology.

Mary Ruth met her future husband, the Reverend Edward Clarendon Hyde, while attending the Mountain Grove Episcopal Mission, that was serviced by Reverend Hyde’s first parish of West Plains Missouri. Mary Ruth was the first person baptized by Father Hyde. The couple married at Calvary Episcopal Church (Columbia, MO) on February 9th, 1943. (The Reverend Hyde was born in Columbia where he resided for most of his life.) The Hydes enjoyed a long and loving marriage, lasting 61 years until Father Hyde’s death on September 7, 2004.

Over the years Mary Ruth worked in a number of academic support positions at the University of Minnesota, the University of Colorado, Stephens College, the University of Missouri, and the Missouri State Teachers’ Association. After Father Hyde shifted his career to Library Science, the couple returned to Columbia in 1957 when Father Hyde joined the staff of the University of Missouri Library, remaining there until his retirement in 1985. On returning to Columbia, the couple moved into Reverend Hyde’s childhood home at 509 Thilly (now a “Most Notable” historic property). During her professional career in Columbia, Mary Ruth took her greatest pride in serving from 1967 to 1987 as the Secretary to Dr. Franklin, the former Editor of the Missouri State Teachers’ Association publication, School and Community.

With her husband, Mary Ruth was an active member of her home church, Calvary Episcopal Church, where she served in the choir, as a lector, a Chalice Bearer, and on the Altar Guild. She also attended and assisted her husband when he served at St. Marks Church (Portland) and Christ Church (Boonville). With her husband, Mary Ruth was active in the Civil Rights Movement and the NAACP. In 1965, she marched with her husband and daughter in Jefferson City in support of civil rights. She regularly attended meetings of the Columbia City Council. An ardent feminist, she was a champion of the Equal Rights Amendment and an active member of the League of Women Voters, PEO, American Association of University Women, and Business and Professional Women’s Foundation.

Late in life, she enjoyed the companionship of Martin Lee Mahula of Columbia, MO, until his death on December 10, 2010. Martin’s daughter, Mary (Mahula) Lamberson of Columbia, was a great comfort to Mary Ruth.

Besides Mary Ruth’s husband and parents, she was preceded in death by her two adult sisters, Winifred Rose (Rogers) Huber, and Harriet Joan (Rogers) Henry. One sister, Elizabeth Jean Rogers, died in childhood. Mary Ruth is survived by her brother, Joseph Murray Rogers, of Springfield, MO.

Mary Ruth was blessed to have a large extended family through the many children of her siblings.